Waddell sees the committee’s work as an opportunity to do more for the veterans who live and work in York. Building a meaningful database of those veterans is high on his list. “We just don’t know who they are,” he says.

YORK -- For a group that was formed just over eight months ago, the Committee for Veterans Affairs has accomplished quite a lot. 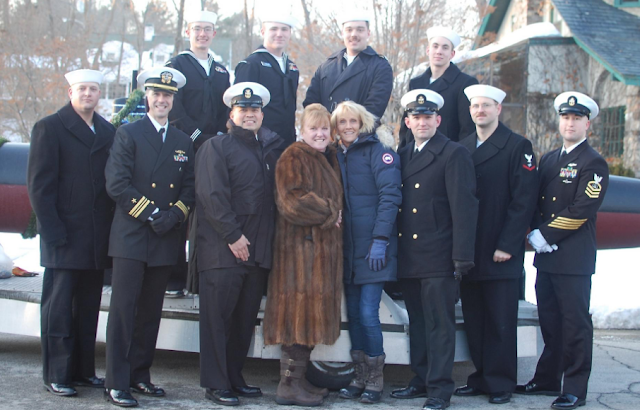 Nancy and Barbara Leigh of York stand with LT. Commander Ryan Gieleghen, Master Chief Eric Frank and crew members of the USS California while they await the start of York's Festival of Lights Parade December 7, 2019


The group has held 12 formal meetings since it was created by the Board of Selectmen April 8, 2019, according to member Mike Dow.

Chair Barry Waddell takes that mission seriously. “Our job is to aid and assist the board,” he says, “but we are not a service organization.” Sometimes, that is a distinction without a difference.
read it here
Posted by Kathie Costos at 1:19 PM

Email ThisBlogThis!Share to TwitterShare to FacebookShare to Pinterest
Labels: US military, US Navy, veterans community