COLORADO SPRINGS — It was a busy day at the El Paso County Jail, but far from it’s busiest. The around 1,450 inmates Tuesday were much more comfortable than this time last year when the average daily population reached 1,800, according to Sheriff Bill Elder.

“There are a lot more people here than I realized,” said Congressman Doug Lamborn, a Republican representing El Paso and Teller Counties in Washington.

Lamborn was visiting the jail Tuesday, the largest jail by inmate population, outside of the state’s Department of Corrections and it is specifically interested in veteran care.

“They might have mental health issues based on PTSD [post-traumatic stress disorder] or they might have things like that,” said Lamborn. “So, being able to treat that population differently from everyone else, I think makes a lot of sense.”

The veteran inmates in minimum security are housed with other inmates and have programs available to them. The deputies who oversee the veterans’ pods are veterans as well.

“One thing I see the veterans do is watching out for each other,” Lamborn said. “There’s a spirit of respect where they take some of the military traditions that they served under when they were in active service.”
read it here


and what they got wrong! 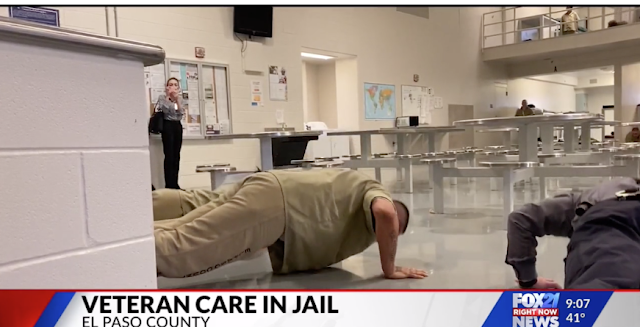 Lamborn was on hand for a daily tradition: 22 pushups at 3:00 p.m. to honor and remember the 22 veterans who take their own lives each day.