Our government has a lot of explaining to do about the rise in suicides, but they do not seem to care about answering to us at all. Why would they since we are not demanding it?

When reports came out about what opioids were doing, they did something.

So why not do something when we have seen a rise in suicides? At the same time more was being spent to prevent them, and researchers have been screaming about drugs being given to fight Post Traumatic Stress Disorder evidence proves it got worse than ever!

While we have been reading about medication reports since the beginning of Wounded Times, apparently, reporters drop the subject instead of connecting the dots. In 2012, I posted Military suicide studies must include drugs after reading a report from Counter Punch discussing the side effects of most of the medications given to veterans, as well as those who currently serve.

This is from part of the report "Boom in suicides" by Martha Rosenberg.


The US’s suicide rate has risen to 38,000 a year, says USA Today, after falling in the 1990s. The rise correlates with the debut of direct-to-consumer drug advertising in the late 1990s, the approval of many drugs with suicide links and more people taking psychoactive drugs for lifestyle problems.

Dr. Benjamin announced that federal grants totaling $55 million will save 20,000 lives in the next five years through suicide hotlines, more mental health workers in the VA, better depression screening and Facebook tracking of suicidal messages. Nowhere, including in the suicide-racked military, does she suggest looking at the overmedication which has gone hand-in-hand with the deaths. And on which the government is spending a lot more than $55 million.

Guess what the number of suicides is now?


10. Suicide
Deaths in 2017: 47,173
When a person dies by suicide, they may have lived with a mental health condition — such as depression, anxiety, or bipolar disorder — for a long time.

However, not all people who attempt suicide or die by it have these conditions.

Suicide is the second-leading cause of death among people aged 10-34 years.

The reports from the DOD and the VA should have caused us to contact every member of congress, since they have been spending our money to achieve such miserable results.

Freaked out yet? Then start paying attention and you will be! Then maybe we can actually save lives instead of just raising awareness they are giving up, 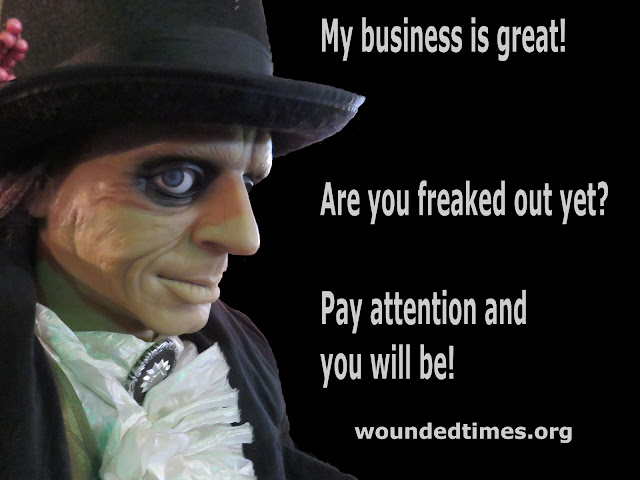 We did nothing meaningful. We just went with whatever was popular on social media. You know, like the stunts raising awareness it was happening...while no one explained what the point of doing any of it was.

Reports kept flooding my email box on how the government was increasing spending fighting PTSD and reducing the suicide rate...almost as often as the rise in suicides were coming in. What I was not seeing was outrage! I was not seeing anyone even questioning why it has gotten worse, while they just posted the same BS reports as if they were supposed to mean a damn thing. The only people it meant anything to were the ones making money off of all of it!

Well BOHICA because while Wounded Times warned about the nasal spray everyone else seemed to think was a good thing President Trump pushed...the report from STATNEWS confirms it was just one more stunt to push on veterans.


In August, President Trump proudly proclaimed that he had directed the Department of Veterans Affairs to buy “a lot” of a drug known as esketamine, the first new major depression treatment with a novel mechanism to hit the U.S. market in decades.

“Its results are incredible,” Trump said at a veterans convention in Kentucky. “I’ve instructed the top officials to go out and get as much of it as you can.”

As of mid-December, the VA had treated just 15 veterans across the country with the drug. The nasal spray, which was developed by Janssen and named Spravato, was only available at seven of the agency’s facilities — out of more than 1,200. The VA treated its first patient with Spravato in June.

And just so you know "Who’s behind the new publication? STAT is produced by Boston Globe Media. Our headquarters is located in Boston but we have bureaus in Washington, New York, San Francisco, Los Angeles, and Cleveland. It was started by John Henry, the owner of Boston Globe Media and the principal owner of the Boston Red Sox. Rick Berke is executive editor."


UPDATE Pharmalittle: Few vets were treated with antidepressant Trump touted;
Posted by Kathie Costos at 10:33 AM