Ret. Lt. Col. John Andersen decided to #BreakTheSilence so others would seek help to heal

'Eating at me from the inside out': After suffering silently for 15 years, Alaska vet encourages others to seek help for mental health challenges


Ret. Lt. Col. John Andersen, a 21-year veteran of the military who served in various capacities, including as an Air Force pilot based at Eielson Air Force Base and with the Pennsylvania Air National Guard, is one of them. 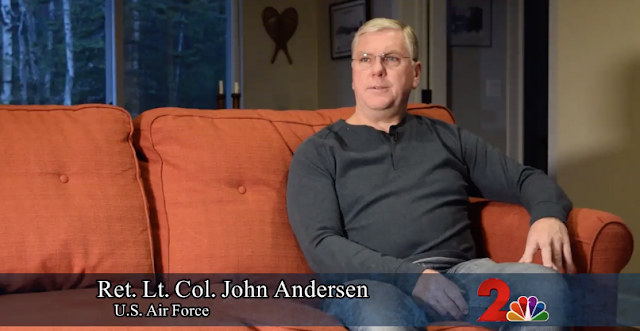 ANCHORAGE (KTUU) - If you are a veteran in crisis, or are concerned about one, you can connect with the veterans crisis line by dialing (800) 273-8255. You can also text the number 838255 or chat online by clicking here.

The great state of Alaska boasts the highest percentage of veterans in the entire United States. About one of every three people in the Last Frontier is either military or a dependent, according to the Alaska Department of Veterans Affairs.

"We have a high amount of veterans in our state," said Sen. Dan Sullivan, (R) Alaska, "which is great, but we also have one of the highest rates of suicide. We need to recognize these are wounds of war, just like being shot is.

"It's a broader issue," the U.S. Marine Corps Reservist added. "It's not necessarily resources, but it's the stigma."

As such, with that grand force of servicemen and women spread across the state comes an often hidden ailment faced by tens of thousands of people each and every day: post-combat mental health challenges.
read it here
Posted by Kathie Costos at 6:46 PM