Survivors of Sabana Seca Navy Base attack honored at memorial

'It's something we all needed': Navy veteran, others attacked by terrorists honored at ceremony


The Times and Democrat
By Gene Zaleski
January 2, 2019


Each of the service members did eventually receive a Purple Heart for the ordeal, but never have been memorialized until now. Allen was one of two women injured in the attack."This is our big recognition now," she said. 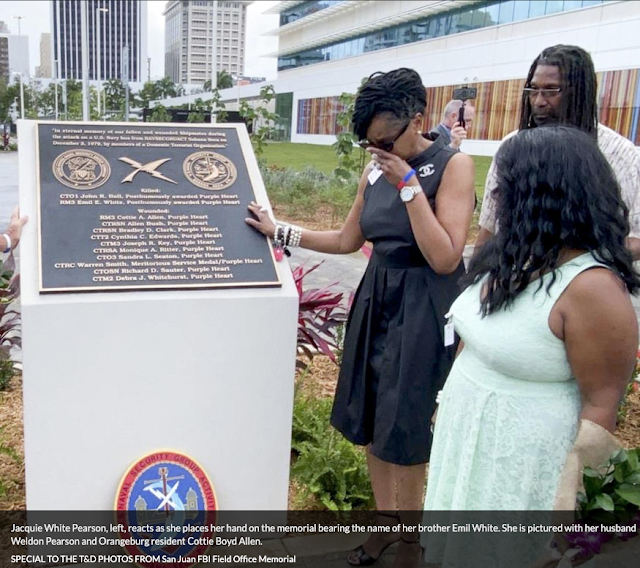 Orangeburg resident and retired U.S. Navy veteran Cottie Boyd Allen's life changed in the blink of an eye 40 years ago.

She was aboard a bus carrying 17 Navy communications technicians to work on a transmitting tower about a mile away from the Sabana Seca Navy base where she was stationed.

Gunmen intercepted the bus and opened fire in a terrorist attack against the unarmed soldiers.

"We were attacked," Allen recalled. "I was wounded four times."

"One bullet went through my face and landed in my temple area; one landed in my buttocks and in my thighs," Allen said. Shrapnel from the bullets is still within her body.

Allen, a native of New Jersey, lost consciousness and was listed in critical condition after the attack. She was transported to Roosevelt Roads Navy Base, which at that time served as a U.S. Navy base in the town of Ceiba, Puerto Rico.
read it here
Posted by Kathie Costos at 9:36 AM