TBI is associated with a greater risk of mental health conditions


by University of Massachusetts Amherst
JANUARY 28, 2020


In addition, Chin found that the risk for post-traumatic stress disorder (PTSD) is higher—not lower, as previous investigators have assumed—among combat soldiers with more severe TBI. 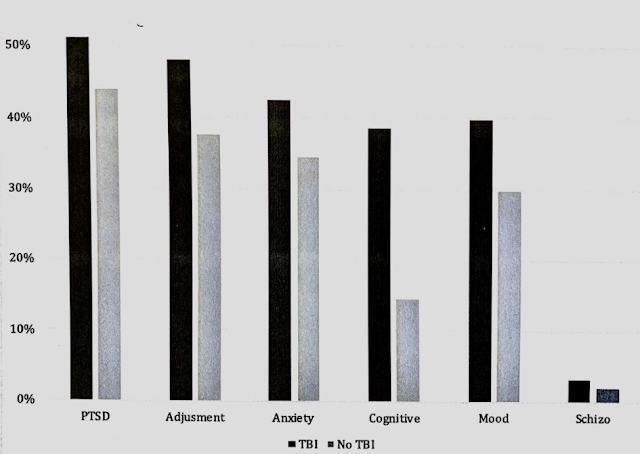 This chart compares the incidence of various mental health diagnoses among soldiers with TBI vs other serious injuries. Credit: UMass Amherst


U.S. combat soldiers who suffered a moderate or severe traumatic brain injury (TBI) are more likely than soldiers with other serious injuries to experience a range of mental health disorders, according to a new retrospective study by University of Massachusetts Amherst health services researchers.

"A central takeaway is that severe TBI is associated with a greater risk of mental health conditions—not just PTSD," says lead investigator David Chin, assistant professor of health policy and management in the School of Public Health and Health Sciences. "Our findings suggest that patients who are critically injured in combat and sustain severe TBI have particularly high rates of mental health disorders."


Mining data from the U.S. Department of Defense, Chin found that 71% of all the severely injured soldiers were diagnosed in follow-up care with at least one of five mental health conditions: post-traumatic stress disorder (PTSD), anxiety and mood disorders, adjustment reactions, schizophrenia and other psychotic disorders, and cognitive disorders.
read it here

The medical campaign to treat psychological problems and brain injury has fallen short. Hundreds of thousands suffer the invisible injuries of war.

First the Pentagon said no U.S. troops were injured in Iran's missile strike last month on an Iraqi air base hosting Americans. Then it rose to 11 with brain injuries, then 34, then 50, and by Thursday the number was up to 64. That's upsetting, as was President Donald Trump's recent comment that "it's not very serious."


Shameful failure to help war fighters
Many years passed before the Pentagon acknowledged IED blasts as a game-changing combat injury. In 2004, I alerted the senior leadership in Army medicine. The young amputees at Walter Reed Army Medical Center complained of headaches, sleep problems and “not thinking right.” Any blast powerful enough to take the legs off a ground trooper would certainly rattle his brains. But, then again, the conventional mentality across the country did not acknowledge the damage from repeated concussions, as too many professional football players have tragically experienced.
read it here

Posted by Kathie Costos at 3:13 PM