Leaving behind being left behind

There comes a time when we get sick and tired of being left behind. We see others being crushed by circumstances or moved passed the masses as if blessed by a force beyond reason. What do those left behind do when they are not so blessed? Do they stay where they are, as sadness overcomes them, or do they make their own path forward? 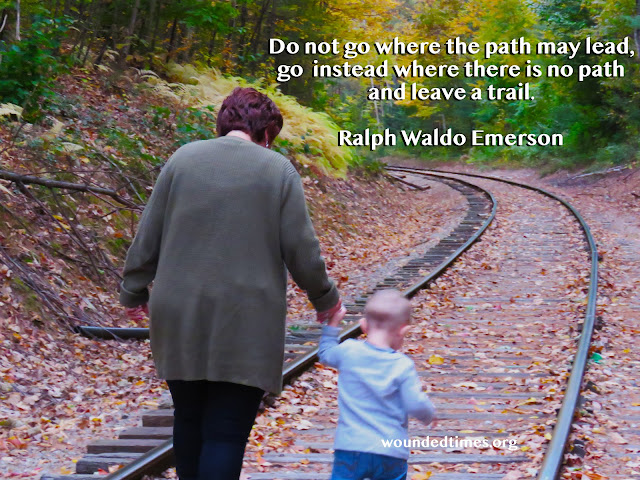 We make our own path forward if others will not help us or get out of our way, and then lead the way for others.

My Mom always told me the surest way to get me to do something, was to tell me I could not do it. She was right. I could not look at life as if it was determined by gender. If my two older brothers could do it, so could I.

There was a time when I was about a year old that I thought I would grow up to become a boy. 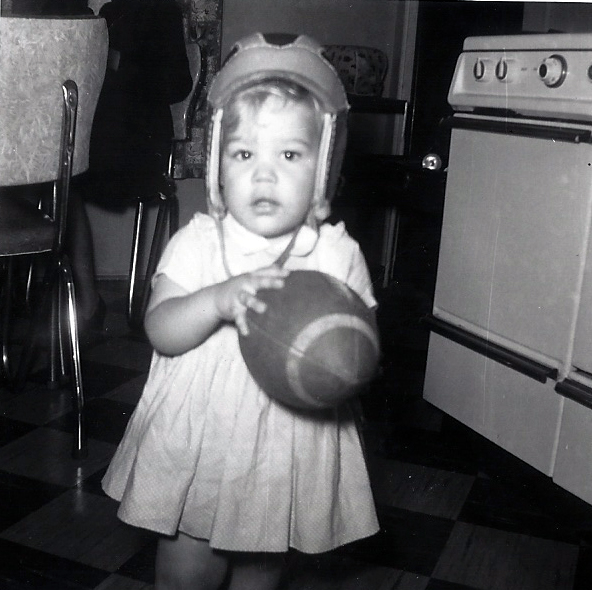 My Mom took a picture of me in a dress with a football helmet and holding a football. Safe bet I had shinny shoes and lacy ankle socks on instead of cleats. I had no clue girls were not supposed to do something like that.

For the last 37 years working on researching and healing PTSD, I competed in a male dominated field. I worked with veterans, mostly males, even though I am not a veteran. Most say it has been OK since I talk like them. Yet those with the power to help me get the message across, would rather use what I could do for their own benefit, or just take it from me. Much like the football, I have a tight grip on what I want to do and will not let go.

So, here we are in a new year and I found my way to do what I was meant to do because some males finally believed in my ability to do it.

The group that has supported me for over a decade, Point Man International Ministries, decided it is time for me to lead the way for female veterans to begin to heal in their own group. We couldn't wait any longer for this to happen, so when I announced my husband and I were moving to New Hampshire, it was to begin this ministry.

Before I decided to do it, I needed to talk to a few female veterans I knew and they agreed I should do it. Then the hardest challenge was to present the idea to a group of veterans on Rally Point. I was again supported by males. They said as long as I was clear that I am not a veteran, they will take what I say based on my background, which includes being an Army brat and spouse of a veteran. Basically it is in my blood.

While I do not know what it is like to risk my life for someone else, or endure what military women go through, I can understand what it can sometimes do to them. If you read FOR THE LOVE OF JACK HIS WAR MY BATTLE you can catch up on that part.

When we consider that women have done many things they were not supposed to do because they are women, we need to look at the beginning of this country and how they have served in every war, including the Revolutionary War.


"Left to support herself alone, Corbin struggled financially. After she recovered, Corbin joined the Invalid Regiment at West Point, where she aided the wounded until she was formerly discharged in 1783. Then, on July 6, 1779, the Continental Congress, in recognition of her brave service, awarded her with a lifelong pension equivalent to half that of male combatants. Congress also gave her a suit of clothes to replace the ones ruined during the conflict."

After all these years and rich history, one would think, had it not been for women doing things they were not supposed to be able to do, we wouldn't leave any female veteran behind. Well, more and more are deciding they are also leaving behind being left behind, and forging ahead. 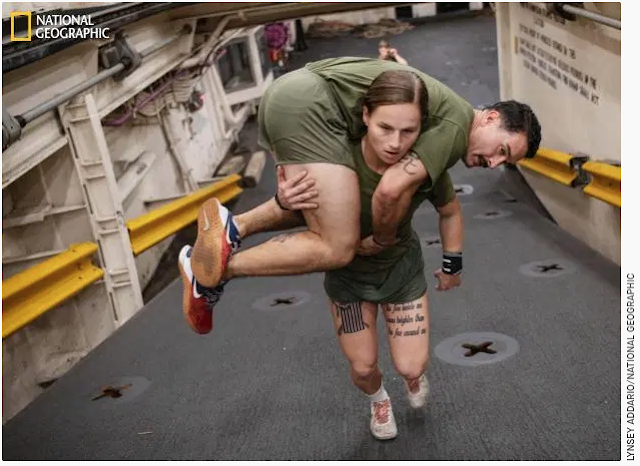 Marines have to be able to carry one another if necessary. USMC Cpl. Gabrielle Green hefts a fellow marine as they ready for deployment on a Navy ship at Camp Lejeune, North Carolina. Of the 38,000 recruits who enter the corps each year, about 3,500 are women—or, in USMC phrasing, “female marines.”

Want to be part of this moving ahead place and time? Contact me at 407-754-7526. Yes, I know that is a Florida area code, but I am not changing my number after all these years. I am just changing the focus from mostly male veterans to females.

If you find a great story on females in the military or in the veteran community, email the link to me woundedtimes@aol.com and we can share more of their stories!
Posted by Kathie Costos at 12:03 PM