Childress, who joined the Marines after graduating from high school in 2013, had served three deployments overseas, according to his obituary notice. It couldn’t immediately be discerned where overseas he served. 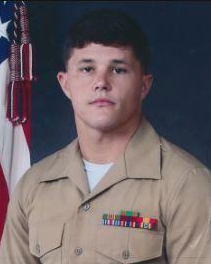 A young Marine sergeant from Chesterfield County who fatally shot himself early New Year’s Day during a traffic stop in Midlothian had been struggling with alcohol and was detained previously for a mental health commitment order, according to his wife and the authorities.

Sgt. Shawn Childress, 24, a Manchester High School graduate who was stationed at Camp Lejeune, N.C., pulled a handgun and shot himself about 1:15 a.m. Jan. 1 after a Chesterfield officer stopped him for suspicion of drunken driving on Midlothian Turnpike near Courthouse Road, police said.
read it here
Posted by Kathie Costos at 9:20 AM