Veteran Angela Peacock's new mission, to save survivors from PTSD


Former Sergeant Angela Peacock is a woman who has dedicated her life and her own survival to educating and helping others and is the definition of a true hero. 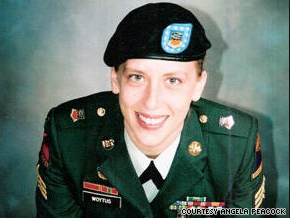 As we sit on the brink of troubling tension with Iran, many concerned about the possibility of another war, MK Mendoza is joined by Veteran Sergeant Angela Peacock who knows the personal cost of war and what post traumatic stress can do. She is not alone. Nearly one out of every ten people in our adult population is a veteran and in some NM counties, that number is close to every 2 out of ten.

Men make up the more than 90% of veterans. And women just less than ten percent. Yet close to a third of all suffer silently with Post Traumatic Stress. And though women still rank in the vast minority in the service, their population has nearly doubled since Vietnam.


She's found a new mission in life: To help all who suffer from Post Traumatic Stress and gives voice to an invisible population and another experience that can kill. Thirty percent of all people are estimated as overmedicated defined as being on more than 5 drugs at a time, and in our elderly population some studies estimate a rate of 67%.
read it here

Posted by Kathie Costos at 6:53 PM