"For every completed suicide there are 10 others" so why support making more aware of them?

Is your group doing more harm than good?

When veterans decide to take their own lives, there is a much bigger problem this country has, than most are aware off. There was a time when it was necessary to put all the reports together so that people would do something about it. That time arrived on Wounded Times in 2007. Why isn't the press on suicide watch was viewed over 9,000 times.

I discovered the reports searching for them to do a video on suicides. Before that, it was a topic in the Veterans' Community, but we spoke about it too quietly. Many of us lost parents, as well as other family members, but we thought it was something to be ashamed of, instead of something that needed to be shouted so that everyone could hear us.

Putting together the report and the video, ripped me apart because I knew what that pain felt like. My husband's nephew, also a Vietnam veteran, took his own life. I also know what it is like when they hear there is an alternative to taking your own life with #TakeBackYourLife.

The time to invest in awareness efforts came soon afterwards, when the American people stood up and demanded the government take action. Since then, billions have been spent on some things that are worth every dime. Unfortunately, even more has been spent by the government that are far from worthy of the loss of one single veteran's life. In the process, we managed to also ignore the families, like mine, left behind to deal with unanswerable questions.

How we arrived here is no mystery. Some just decided they had to do something but did not take it seriously enough to know what they were talking about.

In this report Chaplain to veterans hopes new initiative will help stop veteran suicide out of Australia, you can see how suicide awareness groups can actually make it worse for those struggling.


CATHOLICS leading the battle against veteran suicide have welcomed the appointment of an independent commissioner to investigate deaths and make recommendations on metal health and wellbeing.

Deacon Gary Stone, the man known as the Veteran’s padre, “hopes and prays” a new government initiative will combat veteran suicide, and benefit the wider community.

“For every completed suicide there are 10 others (and their associated families and friends) struggling with suicidal ideation and self-harm.”


What do we see all over social media? Talk about a number attached to veterans committing suicide. We see members of the military, veterans groups, police officers, firefighters and regular citizens, dropping down to do 22 pushups. We see them running, walking and all kinds of other stunts to raise money while claiming they are raising awareness that veterans are killing themselves.

What is the point of all this? Did anyone of them think that their peers are also among those committing suicide and it is not just veterans?

In another report from the CDC, "Suicide is a large and growing public health problem. Suicide is the 10th leading cause of death in the United States. It was responsible for more than 47,000 deaths in 2017, resulting in about one death every 11 minutes. Every year, many more people think about or attempt suicide than die by suicide. In 2017, 10.6 million American adults seriously thought about suicide, 3.2 million made a plan, and 1.4 million attempted suicide."

Tens of thousands of groups have been doing it for over a decade and the trend is growing. What causes most advocates to cringe, aside from the obvious, is there seems to no end to the flood of people making money off this, and no end to the heartache of veterans doing it.

The groups usually use names they think will attract the most attention.

Back in 2015, NPR did a report on how The Number 22: Is There A 'False Narrative' For Vet Suicide? They interviewed Keith Jennings for his input. The problem is, they did not fact check what he said.


"That number, if we talk about it out of context, it's questionable," Keith Jennings, Iraq combat veteran and clinical psychologist, says. He acts as chief science adviser for a North Carolina-based group called StopSoldierSuicide.org.

There is a problem with the name itself. Stop "Soldier" Suicide, used in context, would mean that they are trying to stop soldiers from committing suicide, not all of the services, and certainly not talking about veterans.

At the time NPR produced this article, the DOD report shows clearly that the following statement is also wrong.


So Smolenski and a team, in a study released this year, dug deeper. They found that vets who had served during the Afghanistan and Iraq wars commit suicide at a rate of about one a day — not 22.

The average of suicides within the military has been 500 a year since 2012. (Add in Active Components with Reserve totals.) Is that what the "team" looked at? 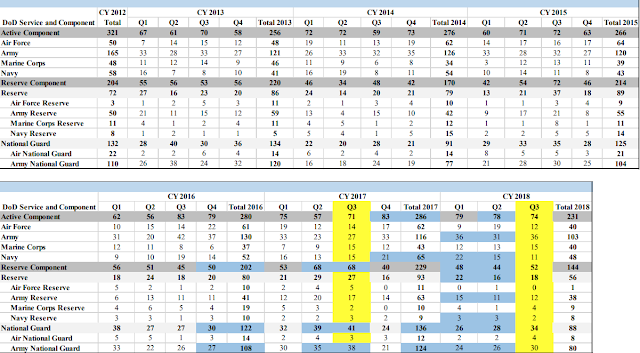 It would make sense however, aside from that, had they really "dug deeper" they would have discovered how many were not included in any of the reports from the DOD or the VA.

If you read Wounded Times, you have seen all the data and links. It is up to them to go and find them, but much like years ago, I offered to help them change the outcome, they were not interested in facts.


22Kill has been studied since they started. "In 2012, the Veterans’ Administration (VA) released a Suicide Data Report that found an average of 22 veterans die by suicide everyday. The 22KILL initiative started in 2013, at first just as a social media movement to raise awareness, and later became an official 501(c)3 nonprofit organization in July of 2015." But had they spent enough time to even read the report? If they had, they would have noticed the number was an average from limited data collected from just 21 states. They would have seen that the majority of veterans in the report, were over the age of 50.

Had they invested time and energy to discover what had been done before the topic struck them?

While the conclusion is, much like this from Task and Purpose, "Likewise, awareness doesn’t do much. You can know a problem exists. That doesn’t mean you are any closer to solving the problem. There are a lot of diseases and societal issues with different color ribbons and special days for awareness, but not a lot of solutions. Veterans dying by suicide has been all over the news since the Department of Veterans Affairs scandal broke in April 2014."

Wounded Times has been covering veteran suicides since 2007, right after it started...and lost money every year since the work of changing the outcome matters a hell of a lot more than anything else. Before the move from Florida to New Hampshire, average page views were over 1,000 a day. Right now, after trying to rebuild from a two month break, it is about 600 a day.

Stop Soldier Suicides says, since they started they served 1,000+ has managed to take in over $3 million in 2018, but they are hardly the largest group.

So where exactly is your money going? Find something that will actually make a difference, like taking the time to know about the topic before you share the stunt. Make sure that what you read, is actually the truth, instead of words that stick in your brain. Until we start using words that change the outcome, we will keep contributing to it.

If you have a group that has been raising awareness, it is time to change the subject and earn the money by helping them stay alive!
Posted by Kathie Costos at 9:43 AM