Crawford’s DD 214 discharge form would have shown that he went AWOL after a few months of Army boot camp in 2007.

Instead, Crawford told members at the American Legion that he was an Iraq war veteran injured in an IED explosion. 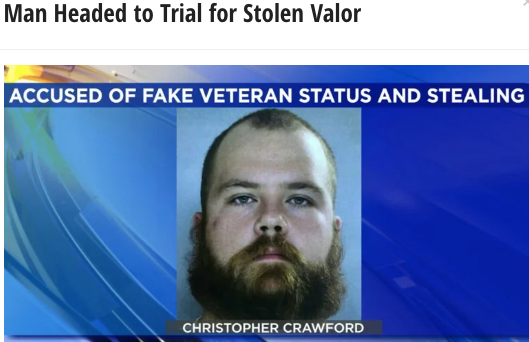 SCRANTON, Pa. — A man from Scranton will stand trial for impersonating a veteran.

Prosecutors say while Christopher Crawford was lying about his military record, he was stealing money from the American Legion in the city where he was a member.

Crawford was serving as an officer at American Legion Post 568 in the Minooka section of Scranton. Last summer, his fellow officers reported Crawford for allegedly stealing $16,000 from the organization. That’s when it was also discovered that Crawford was not a veteran at all.

The veterans we spoke say between those two sets of charges, it’s the stolen valor, not the stolen money, that hurts most.
read it here
Posted by Kathie Costos at 5:01 PM