Will Senator Sanders ever apologize for what happened to veterans?

Will Senator Sanders ever apologize for what happened to veterans? 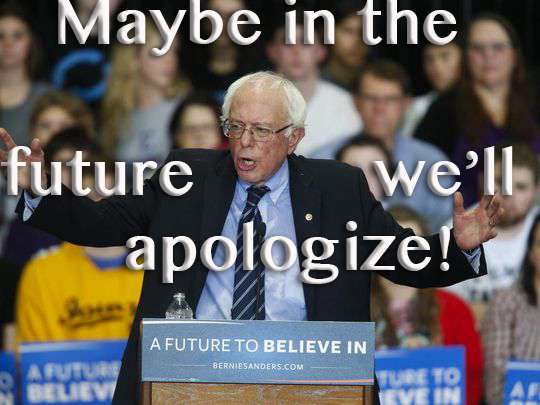 
He lead the Senate's veterans committee from 2013 to 2015, and touted his work repeatedly as proof he can negotiate with Republicans and reach critical compromises to help constituents. The 2014 reform legislation in particular, he said "increases accountability within the VA and ensures that all veterans have access to timely health care."

The Obama administration is moving to undo the Democratic presidential candidate’s past work as Senate Veterans' Affairs Committee chairman in an effort to clean up the department, considering a change in employment rules for VA executives that Sanders fought for vigorously just two years ago.

In recent weeks, the VA has seen a host of job actions against senior employees overturned by the Merit Systems Protection Board, an independent, "quasi-judicial" agency that serves as arbiter on a number of federal worker cases. They include the demotion of two VA executives accused of gaming the department’s hiring system for personal benefit, and the dismissal of a New York VA director over patient safety concerns.

The appeals fight has grown into an escalating intra-administration showdown between VA leaders, who call the decisions off-base, and protection board officials, who blame bad legislative changes for the unsatisfactory rulings.


Earlier this month, at a New Hampshire town hall event, Sanders acknowledged that "we should have acted sooner" on reports of wait-time problems and expressed regret that he didn’t have a quicker solution for "those long waiting lines and the lies that some administrators were telling us."
the link is still active and you can read it here


If you have not been paying attention all along, that should get you started to be aware, the recent reports are not new. Veterans are still waiting too long for appointments, among a lot of other issues, including feeling committing suicide at VA hospitals is the only way they can be heard. Nothing will ever get fixed for their sake unless we hold ever single one of them accountable and demand they answer to all of us!
Posted by Kathie Costos at 9:42 AM