MONROE, La. (KNOE) - A local army veteran helped another vet who had been homeless for years. Drew Baker and Arthur Calhoun first met when Calhoun was looking for a warm place to rest in a local restaurant. 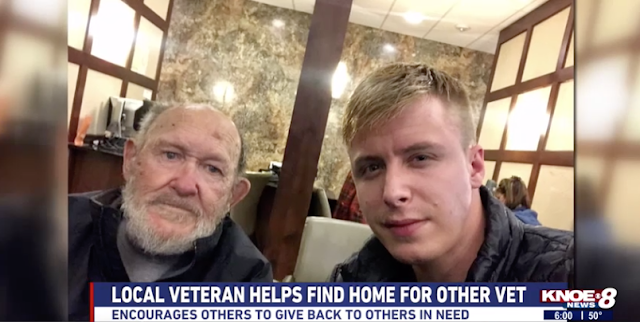 “It was quite a shivering cold day that evening," Baker says. "He had came in trying to seek some shelter. It was warm. There were a couple individuals offering to give him a ride home, but Mr. Calhoun explained he didn't have a home. He was living on the street."

After meeting the 83-year-old Korean War veteran a second time on the Louisville Bridge, Baker knew he had to find a way to help him.

Baker gave Calhoun food, opened up his home for a few nights in his home and even helped get Calhoun admitted into the hospital to check on some injuries.

"I put Mr. Calhoun in a hotel for a couple of nights until the Northeast Louisiana Veteran's Home could take him in and get everything processed."

"This guy has saved my neck a time or two,” Calhoun says. “He don't look much like a hero, but he's a pretty good friend."
read it here
Posted by Kathie Costos at 5:02 PM