A Charity for Disabled Veterans Raised Nearly $300 Million. Why Did Most of the Money Barely Reach Them?


“Nothing has changed. Based on the results, they’ve gone back to what they’ve been doing in the past that got them into trouble.” Daniel Borochof Charity Watch 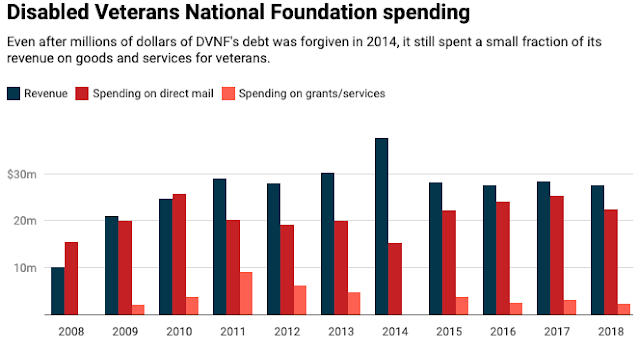 In the summer of 2014, the Disabled Veterans National Foundation was in dire straits. Only seven years after setting up shop, DVNF had raised more money than all but a handful of other veterans groups, but only 15 percent of its revenue in that time directly reached veterans. The rest was owed, almost entirely, to a single contractor—an outcome that had already sparked a congressional probe and investigations by Florida and New York’s top prosecutors.

Like other groups, DVNF used sappy solicitations to raise money, often centered around veterans with heartbreaking stories of injuries suffered in combat. But many of these characters were completely made up. By the time New York authorities announced a settlement with DVNF that summer, the charity was spending 90 cents of every dollar it raised to pay Quadriga Art, the direct mail firm that coordinated its fundraising campaign, and Convergence Direct Marketing, a firm that designed the direct-mail solicitations. As part of the agreement, Quadriga was ordered to forgive DVNF’s massive debt and pay the state nearly $10 million, the “largest amount of financial relief ever obtained in the US for deceptive charitable fundraising,” according to the New York attorney general’s office.


Instead of cutting ties with Quadriga, DVNF has continued fundraising at near record levels while using most of its revenue to offset exorbitant direct mail costs. While the settlement barred DVNF from resuming the same fundraising arrangement with Quadriga or any of its “successors” for three years, it did not say anything about restricting DVNF’s fundraising costs. And it still permitted the charity to work with Quadriga in a limited capacity if the firm won a “competitive bidding process.”
read it here


If you have been donating to this group thinking they are Disabled American Veterans...they are not!