When people get sick or military members deploy, PACT finds free foster care for their pets


“I had no dog to come home to,” said King, who lives in Newark, Del. “It broke me like you wouldn’t believe.”

But after a stressful combat tour in Afghanistan, he adopted Bandit, a Rottweiler mix, who stayed by his side as he dealt with post-traumatic stress disorder. Soon after, King found Ruger, a puppy who’d been used as a bait dog by a dog-fighting ring.

When King learned he was being deployed again, this time for six months, he turned to PACT. 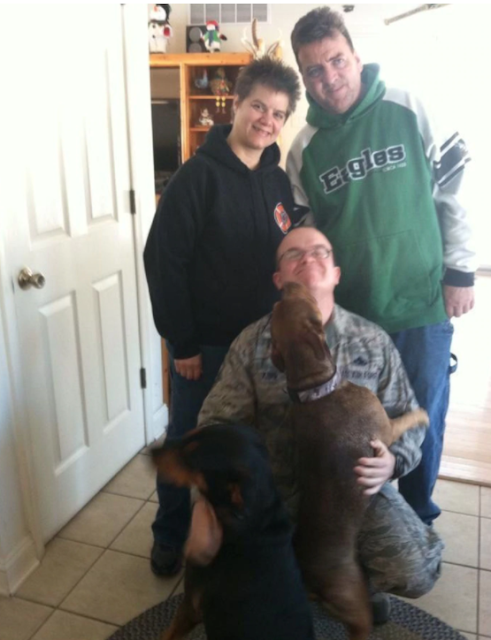 COURTESY OF MIKE KING
Mike King (center) had a joyful reunion with his dogs after returning home from overseas deployment. His dogs were fostered by Gin Keefer and John Melleady (standing) while he was away.


In 2011, Buzz Miller was disturbed to learn that some deploying military members surrendered their dogs and cats to animal shelters because they had no one to care for the pets while they were away.

That prompted him to create PACT for Animals, a Philadelphia-based nonprofit that finds free foster homes for animals of deployed members of the military and for hospitalized patients of all ages.

PACT (an acronym for “People + Animals = Companions Together”) has 250 foster homes in the Greater Philadelphia area and 450 more throughout the country. Since 2011, the organization has arranged temporary homes for more than 1,000 pets.

“I’m all about the human-animal bond,” said Miller, 78, an “animal nut” who left his 35-year law career for PACT. “I can’t stand the thought of a military person going to Iraq or fighting ISIS and they have to give up their animal. I can’t let a kid fighting cancer or heart problems at CHOP lose his animal.”
read it here
Posted by Kathie Costos at 8:50 AM