Spreading suicide awareness spreads more suicides of younger veterans and older ones too!

If you still think that the groups raising awareness veterans are killing themselves is a good thing...YOU ARE NOT THINKING AT ALL!

The number of young veterans who know someone who has died by suicide or considered harming themselves both increased significantly in recent years according to just-released annual membership survey of Iraq and Afghanistan Veterans of America, another sign of the mental health struggles facing the military community. 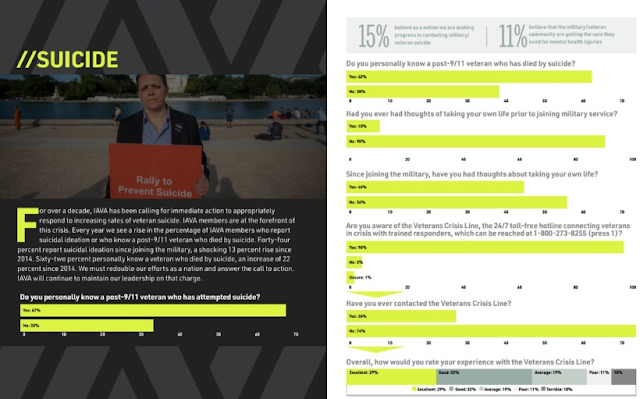 An excerpt from the annual Iraq and Afghanistan Veterans of America member survey released on March 4, 2020. More than two-thirds of individuals who participated said they know a fellow veteran who attempted suicide. (Courtesy of IAVA)

Of the more than 1,700 veterans who participated in the questionnaire, more than two-thirds said they know at least one post-9/11 veteran who has attempted suicide. Nearly as many — 62 percent — said that they have lost a fellow young veteran to suicide.

Six years ago, only about 40 percent of members surveyed said they knew of a fellow veteran’s suicide.
read it here


When will people wake up? What will it take for veterans to stop being treated like they are not worth every effort to let them know they can heal...they do not deserve to suffer...they are not broken and their lives are not hopeless?

As long as all this crap taking over social media is support, they will lose whatever shard of hope they have left and become one of the ones everyone is talking about, raising money talking about something they have no clue about and increasing their numbers of those we failed!
Posted by Kathie Costos at 6:51 PM