1918, when the so-called Spanish flu ravaged the planet and lessons not learned

'We Haven't Learned From History': 'Radio Influenza' Is A Warning From 1918


The last great pandemic struck the world more than 100 years ago. But voices from that time can still be heard in Radio Influenza, a haunting work of audio art available online. 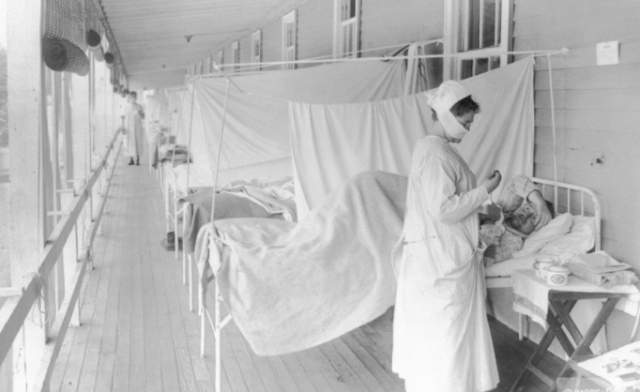 A nurse works in the influenza ward of the Walter Reed hospital in Washington, D.C., in November 1918. Artist Jordan Baseman evokes the era in Radio Influenza, a work of audio art commissioned to mark the centenary of the pandemic. Harris & Ewing / Library of Congress via AP


The voices are not real. They're computerized. They sound tinny and faraway as they read fragments of newspaper stories from 1918, when the so-called Spanish flu ravaged the planet. Still, these fleeting dispatches from the past are uncannily relevant.

"A man with a cold can easily throw it twelve feet by a sneeze," cautions an entry from Oct. 2, 1918. "Therefore, he must be kept at a distance. Sneezing and coughing unscreened by a handkerchief should be regarded as an assault. The sick animal who creeps away by himself until he has recovered shows an example that man would do well to follow."

Radio Influenza was created by Jordan Baseman, an American artist who works in London. He didn't want the project to sentimentalize or romanticize the past. "I wanted it to sound like a broadcast from a dystopian future," he explains. "So what we hear are artificial voices that I've manipulated to sound ... kind of real?"

Baseman started Radio Influenza two years ago to coincide with the 100th anniversary of the flu pandemic that killed more than 50 million people worldwide. There's an audio entry for each day of that year. Not all entries are taken verbatim from newspapers.

Some are cobbled together, with a certain amount of what Baseman calls "intervention." (This is art, after all, not journalism.)
read it here
Posted by Kathie Costos at 7:35 PM