Homeless veteran was assaulted, abandoned by hospital...helped by police officers and angels

"I saw a very frail, frail old man that physically appears much older than 62," Zamudio said.

Spittle later told Zamudio and Voice of San Diego he had been released from Scripps Memorial Hospital in La Jolla after being assaulted in Pacific Beach over the weekend. He believes he has a broken rib and said he was initially unable to walk more than a couple feet.

Marine veteran Steven Spittle, 62...Let that sink in for a minute.

Now here is the story. 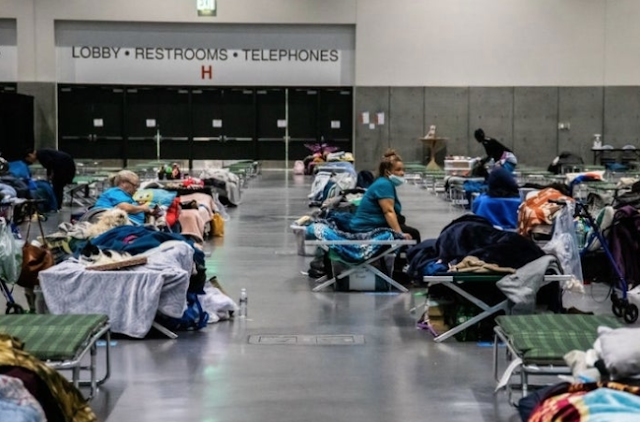 The city of San Diego is temporarily housing homeless residents at the Convention Center in an effort to stop the spread of the coronavirus. (Adriana Heldiz/Voice of San Diego)


SAN DIEGO, CA — Marine veteran Steven Spittle, 62, had just been discharged from a local hospital after he said he was assaulted over the weekend. He's lived on the streets for years, so he said hospital staff paid for a cab to drive him to the temporary shelter at the Convention Center on Sunday afternoon.

But there wasn't a bed available for Spittle, who was in pain and too weak to stand. He laid outside the Convention Center, confused and unsure what to do.
v Lacking other options, an officer from the Police Department's Homeless Outreach Team called activist Amie Zamudio, who has teamed with another local activist, Tasha Williamson, to put up vulnerable homeless San Diegans in hotel rooms, to ask if she could take in Spittle for the night. Zamudio said yes and rushed to the Convention Center.

The situation captures the desperation playing out as homeless San Diegans seek shelter that's in limited supply during the coronavirus pandemic and local governments and activists scramble to respond. The mayor and other elected leaders have touted the decision to open the Convention Center to homeless residents as a significant step toward protecting the homeless community during the pandemic. Faulconer even called it "a centerpiece of our fight against the coronavirus," when he announced the facility would open to the homeless. But Spittle's experience demonstrates that the need for shelter is still greater than the capacity.

In the absence of resources, advocates like Zamudio and Williamson, who have temporarily housed more than 50 homeless San Diegans in a Midway hotel – an effort that's separate from the county's plan to house vulnerable residents in hotel rooms – have sometimes filled gaps.
read it here
Posted by Kathie Costos at 3:29 PM