Time to stop the political nonsense

All day I have been trying to put together some interesting reports on what is happening to our troops, as well as our veterans. All day, I have been involved in debates that should have been based on facts and not political comments that do not add anything to coming any closer to actually supporting them.

The worst on was about FEMA taking masks that were appropriated by the VA.

On Saturday, in an interview in the Washington Post, Veterans Health Administration acting executive Richard Stone acknowledged that some hospitals have been forced into “austerity levels” as Federal Emergency Management Agency officials have diverted planned supplies to the government’s emergency stockpile. (Military Times)

A comment that it turned my stomach caused someone to respond by saying it was a political attack agains the president instead of "corrupt FEMA" showing no understanding of how the government works, what they are responsible for...and who is actually responsible for every department.

This exchange wasted more than my time. Stuff like that takes time all of us should have been making sure we actually live up to the slogan of "support the troops" and actually treat the best military in the world AS IF THEY WERE WORTHY OF EVERYTHING WE CAN DO FOR THEM!

Cutting T-shirts to cover their faces?


Service members will be instructed to start wearing face coverings in public in the latest effort to limit the spread of the deadly coronavirus, Defense Secretary Mark Esper said in in a military-wide memo issued Sunday afternoon.DoD will not issue masks specifically for this and the memo says individuals should make their own face coverings.

How the coronavirus pandemic has shaken the US military

One of the clearest indicators of the level of concern within the Pentagon is the fact Defense Secretary Mark Esper has put strict limits on the amount of information being shared with the American public.


(CNN)The Department of Defense had unusual visitors on Thursday morning. 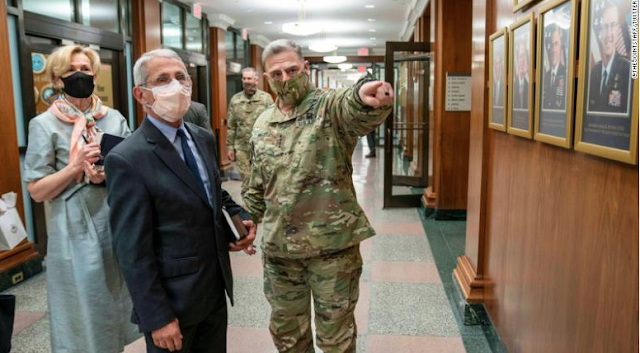 Dr. Anthony Fauci and Dr. Deborah Birx, two of President Donald Trump's key coronavirus advisers and public faces of the crisis, donned masks and were shown into "the tank" which is the Pentagon's secure conference room. They were there to meet with Gen. Mark Milley, Chairman of the Joint Chiefs of Staff and Vice Chairman Gen. John Hyten to discuss the military's efforts to manage the coronavirus pandemic and the medical expertise needed to protect the country's 1.4 million military personnel.

The meeting underscored a critical national security issue that has not been publicly discussed in detail by the President, the challenge of ensuring the military is ready to deploy and fight amid the pandemic.

As the country prepares for a possible second wave of the virus this fall, the obstacles facing the Pentagon are massive. They range from assembling robust testing capabilities to ensuring there is a constantly replenished supply of personal protective equipment, while all the while continuing to provide medical personnel to support the civilian healthcare system.

And beyond keeping the military functioning there's a realization within the that the pandemic could upend geopolitics and create new and unpredictable threats to US national security.
read it here

Until we actually get politics out of the way, we will keep failing them! They deserve only the best from us. So far, we sure as hell do not deserve them. Still think this is political? I have gone after every president since Reagan...and none of them lived up to what they promised any generation.

The Navy said Monday that 955 Roosevelt sailors have tested positive for the novel coronavirus, about one in five crew members. About half the infected are showing no symptoms, the Navy says.

The service also changed how it determines if a sailor has recovered from COVID-19. On Saturday, the Navy reported 112 Roosevelt sailors had recovered from the virus; now, it says, only 14 have. (San Diego News Tribune)

Posted by Kathie Costos at 7:49 PM