"I was informed that my father had no scheduled appointment. Even all of the CT scans, his chemo, everything had been canceled, but no one had contacted us," said Barron who's been trying to contact the VA Hospital in Shreveport to see if her father's treatments could be moved to that location. 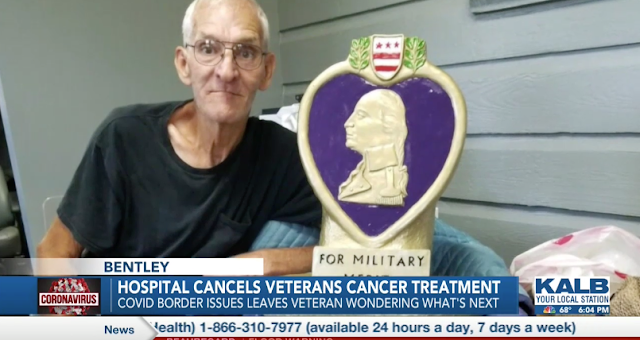 BENTLEY, La. (KALB)- 64-year-old Byron Walters has been to Vietnam and back, serving his country in the United States Army.

He's currently battling the COVID-19 pandemic with the rest of Louisiana on top of stage 4 cancer.

"I have prostate cancer, lung cancer, bladder cancer and liver cancer," said Walters as he explained that he's due for his fourth round of chemotherapy.

The VA Hospital in Houston, Texas has been treating him since he found out about his cancer and that's where he was scheduled to travel for his next appointment this month. He's been told that his treatments should be done no more than 3 weeks apart.
read it here
Posted by Kathie Costos at 4:05 PM