We failed to hold them accountable for any of this

Now is the time for accountability from the Senate

No matter what side you are on politically, the Senate Intelligence Committee did not do their job and too many citizens paid the price for it!
Intelligence report warned of coronavirus crisis as early as November: Sources


"Analysts concluded it could be a cataclysmic event," a source said.

As far back as late November, U.S. intelligence officials were warning that a contagion was sweeping through China’s Wuhan region, changing the patterns of life and business and posing a threat to the population, according to four sources briefed on the secret reporting. (ABC News)

There were already reports about how the President did not read the daily Intelligence briefings.


President Donald Trump on Tuesday said he never read or considered reading a memorandum in which his top trade adviser warned of the need to implement an "aggressive containment" strategy to prevent a massive loss of life and economic damage from the COVID-19 pandemic.


So who did? The larger question should be, knowing the President did not read the reports, what did the Senate know and when did they know it? 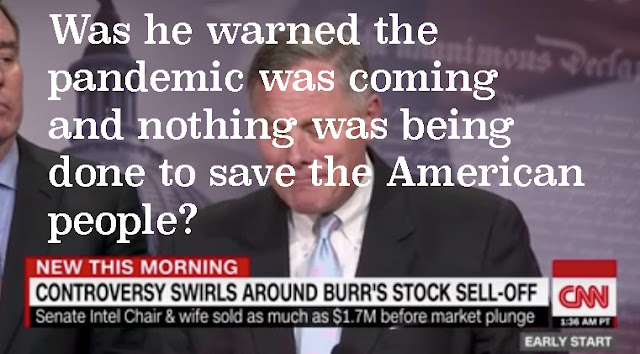 CNN reported the head of the Senate Intel Committee sold stocks ahead of the pandemic hitting here. (CNN) Senate Intelligence Chairman Richard Burr is asking the Senate Ethics Committee to review his sale of up to $1.7 million in stocks last month ahead of the sharp market decline that's resulted from the novel coronavirus global pandemic, according to Senate documents."

The problem goes way beyond making a buck off of this. As we have learned recently, the President was given reports ahead of time about the global pandemic hitting the US. In tern, the Senate Intelligence Committee would have been informed as well. They did nothing for us knowing the President was not getting the country ready.

Instead of doing whatever they could to get the information out to the Governors to take action ahead of time, they used it to make money.

This is what the Senate Intelligence Committee is responsible for....


The question is, what are we going to do about this? Here is what else they are supposed to do

But every branch of the government has Senate committees that are supposed to be making sure those branches are doing their jobs, considering that is why they were placed on those committees.

Why didn't the members who were advised what was coming, not make sure the other committees were also aware and prepared?

We have troops stationed all over the world, yet they did not have what they needed to protect themselves. They are making masks from t-shirts. 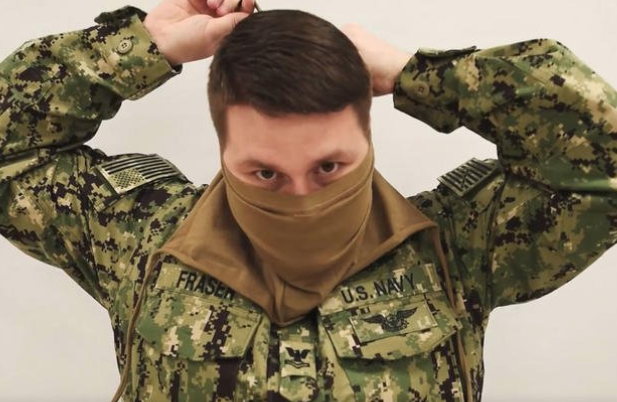 The military branches are requiring troops to make their own cloth face masks after the Pentagon's latest policy directed face coverings for all personnel during the novel coronavirus outbreak.

The Defense Department announced Sunday that troops, DoD civilian employees, contractors and family members are encouraged to make simple coverings out of clean T-shirts and other household materials. The do-it-yourself face coverings are mandatory whenever people cannot maintain six feet of social distance in public areas or places of work, according to the policy, signed by Defense Secretary Mark Esper.
read it here


We can simply remain deluded into thinking that those we elect to represent us are doing their jobs, or we can assume none of them are. The most frightening part is, we failed to hold them accountable for any of this.
UPDATE
Add this to all of that!
Number of troops diagnosed with COVID-19 jumped nearly 50 percent over the weekend
Posted by Kathie Costos at 12:58 PM