Taylor's own experience with PTSD and homelessness enabled him to form a real connection with homeless veterans, according to those close to him. 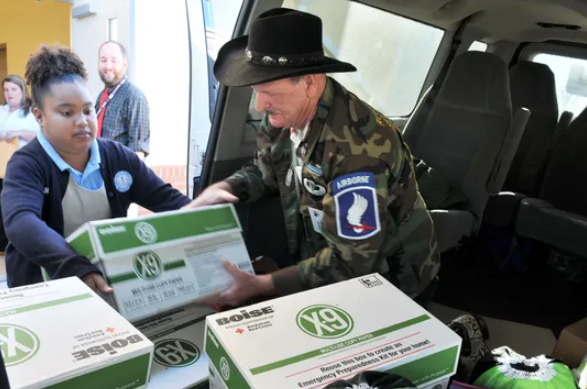 Students at Pineapple Cove Classical Academy in Palm Bay invited veterans and veterans groups to their campus on Friday for a Valentine's Day to honor their service, and learn from their experiences. The kids put together care packages for National Veterans Homeless Support, and loaded them up in a van for NVHS Founder and President George Taylor, Sr. (Photo: TIM SHORTT/FLORIDA TODAY)

George Taylor, the longtime champion of veterans issues in Brevard County, passed away Sunday at the age of 70 after suffering a heart attack last Thursday.

He could be commonly found in the wooded areas and sandy scrub brush where homeless veterans were known to camp. Reaching out to them and connecting them with needed services was his purpose and his mission and led him to found National Veterans Homeless Support, a group that aids homeless vets.
read it here
Posted by Kathie Costos at 9:36 AM