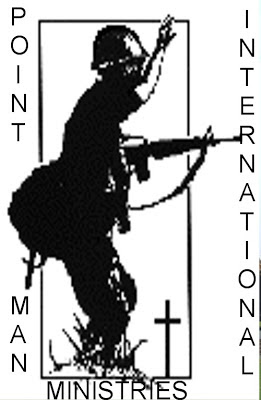 
Since 1984, when Seattle Police Officer and Vietnam Veteran Bill Landreth noticed he was arresting the same people each night, he discovered most were Vietnam vets like himself that just never seemed to have quite made it home. He began to meet with them in coffee shops and on a regular basis for fellowship and prayer. Soon, Point Man Ministries was conceived and became a staple of the Seattle area. Bills untimely death soon after put the future of Point Man in jeopardy.

However, Chuck Dean, publisher of a Veterans self help newspaper, Reveille, had a vision for the ministry and developed it into a system of small groups across the USA for the purpose of mutual support and fellowship. These groups are known as Outposts. Worldwide there are hundreds of Outposts and Homefront groups serving the families of veterans.

PMIM is run by veterans from all conflicts, nationalities and backgrounds. Although, the primary focus of Point Man has always been to offer spiritual healing from PTSD, Point Man today is involved in group meetings, publishing, hospital visits, conferences, supplying speakers for churches and veteran groups, welcome home projects and community support. Just about any where there are Vets there is a Point Man presence. All services offered by Point Man are free of charge.


The leader of the Newark post, Russ Clark, is a retired Marine who fought in Vietnam. Clark was a Methodist minister for 25 years before leaving the pastorate due to life upheaval brought on by Post Traumatic Stress Disorder. He knows firsthand the devastation PTSD can bring into the lives of veterans and their families.

“I lost a family. I lost a ministry. Point Man is now my calling,” Clark explained. He said helping other veterans has brought him great healing. He encourages other veterans to reach out to those with similar experiences.


read it here
Posted by Kathie Costos at 1:55 PM