Not "tragically bound to the starless midnight"

Our nation is facing an epidemic of historical proportions. We have a pandemic claiming over 100,000 lives in a span of about 3 months. We have over 40 million unemployed. Healthcare workers are dying while trying to save lives while many other providers are losing their jobs. Protests to reopen the states have included individuals showing up with guns. Many people are regarding the pandemic as someone else's problem. We have racists, no longer ashamed of how they view fellow citizens. Native Americans are dealing with the virus killing them in higher number, poverty, lack of services, at the same time they are under threat of losing their lands. This is a nation in crisis.


“THESE are the times that try men's souls. The summer soldier and the sunshine patriot will, in this crisis, shrink from the service of their country; but he that stands by it now, deserves the love and thanks of man and woman. Tyranny, like hell, is not easily conquered; yet we have this consolation with us, that the harder the conflict, the more glorious the triumph. What we obtain too cheap, we esteem too lightly: it is dearness only that gives every thing its value. Heaven knows how to put a proper price upon its goods; and it would be strange indeed if so celestial an article as FREEDOM should not be highly rated” ― Thomas Paine, The Crisis

"What we obtain too cheap, we esteem too lightly." as Thomas Paine said so eloquently, applies to what this nation faces today. More and more people are forgetting how we got where we are and the price paid by generations who came before them. They forget that entire generations risked their lives in service to this country in times of war, as well as times of peace. They paid for the freedom so many others want to claim as their "right to enjoy" at the same time they want to remove the rights of others.

While those who entered the military were from all political sides, color, states and religious beliefs, they managed to set aside their differences and were willing to die for one another. We should take that to heart, especially now, but we have faced the crushing burdens before. The difference is, we learned from them.

In 1968, someone filled with hate assassinated Rev. King after he was willing to pay the price to achieve social justice for Black Americans, peacefully protesting and speaking out against using violence to respond to violence. I was alive then and remember it. Just as I was alive when President Kennedy was assassinated, and his brother Bobby was killed. Yet all of these men moved the majority of my generation to stop seeing people based on color of their skin. It was about the "content of their character" that mattered.

Looking at what is happening in this country right now, we have witnessed a reversal of that. Are there bad police officers? Yes, but not all police officers are bad, but while the majority are good, they are all being attacked for what the few bad ones do.

We see protestors flooding the streets, rioters and looters destroying property and burning down businesses in their communities during a pandemic. We see some others showing up to protest orders by the governors of their states with arms, attempting to intimidate their fellow citizens and politicians to yield the better judgement for the greater good to do their will. Are all protestors committing crimes? No, but again, they are all being blamed for what a few do.

“I have a dream that my four children will one day live in a nation where they will not be judged by the color of their skin, but by the content of their character." Rev. Martin Luther King Jr. 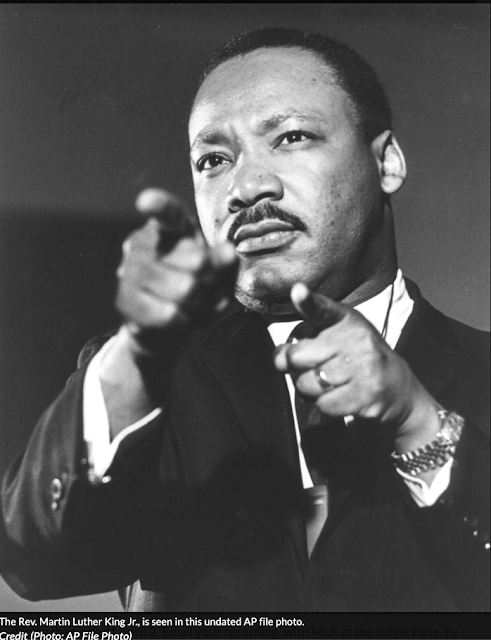 Martin Luther King, Jr.
While anger and fear have gripped this nation, we are forced to expand our view aways from what is on the news and see what else is happening to find signs of hope.


“I refuse to accept the view that mankind is so tragically bound to the starless midnight of racism and war that the bright daybreak of peace and brotherhood can never become a reality." Rev. Martin Luther King Jr.

The majority of people in this country are trying their best to do the right thing. Mankind is not "so tragically bound to the starless midnight of racism and war" because there is "peace and brotherhood" still alive in the shadows of one of the worst times in this country.

People of all political sides, color, states and religious beliefs are stepping up for their fellow citizens and the greater good. People are regarding the "content of character" that requires a heart that will not judge anyone by anything else. Thoughts are motivating action to fight against hopelessness. Prayers are motivating action to help others suffering by finding way to do whatever they can for total strangers.

Yes, these are bleak times in this country, but we have been in darkness before. We survived those days because others stepped up refusing to accept what "was" because they dreamed of what could be.
Posted by Kathie Costos at 10:01 AM