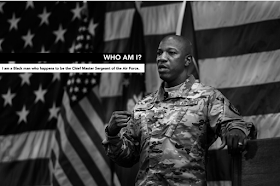 Chief Master Sergeant of the Air Force Kaleth Wright posted a lengthy and passionate thread on Twitter about police brutality and the deaths of black men like George Floyd Monday night. (Air Force)


Chief Master Sergeant of the Air Force Kaleth Wright on Monday announced an independent review of the service’s justice system after a series of scathing reports that showed it disproportionately punishes young black airmen.

And in a lengthy, passionate Twitter thread posted as the nation continued to be roiled by protests and fury over racism, police brutality and the deaths of George Floyd and other black men at the hands of police, Chief Wright — who is the second black man in history to be the Air Force’s top enlisted leader — invoked several of their names and expressed solidarity with them.
read it here
Kathie Costos at 4:20 PM
Share