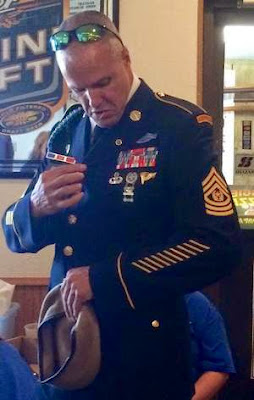 The toothpick and sunglasses
were two red flags for veterans that
Richard Rahn was faking military service.
(Courtesy of Chet Blue)

In public, Richard Arthur Rahn was a Ranger-tabbed command sergeant major who attended American Legion gatherings and other ceremonies, swapped tales of combat with veterans and pressed the flesh with civic leaders.

In private, he offered comfort to a Gold Star family — visiting their Minnesota home, shedding tears with them over their fallen son, even offering a small statue of a praying soldier as a token of appreciation for their sacrifice.

In reality, he was a faker and a felon.

Rahn, 54, spent the summer attending various events while posing as a high-ranking noncommissioned officer, but when he donned his dress uniform at an Olivia, Minnesota, Legion post to greet participants in a motorcycle ride paying tribute to six fallen soldiers, the ruse was up.

Veterans spotted multiple problems with the uniform, everything from an out-of-whack ribbon rack to a Combat Infantryman Badge that would’ve required Korean War service. Tips came in to local law enforcement, and it soon became clear that unearned medals were the least of Rahn’s problems.
read more here
Kathie Costos at 6:12 AM
Share