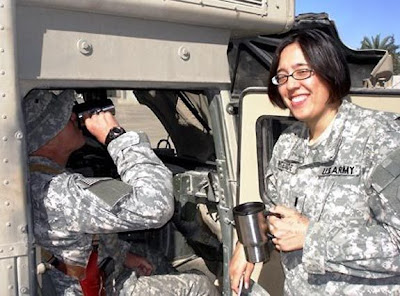 Military Justice
Why did it take a near-tragedy for the Army to do the right thing in the Whiteside case?
"ONE OF THE Army values is integrity, which is defined as doing what is right, legally and morally. The moral thing to do is dismiss these charges . . . . " That recommendation of an Army investigator more than a month ago in the case of 1st Lt. Elizabeth Whiteside was not acted on until after this vulnerable young woman attempted suicide a second time. The delayed reaction offers another troubling glimpse into the military's attitude about mental health issues.

Lt. Whiteside is the 25-year-old Army reservist who faced a court-martial after she suffered a breakdown and tried to commit suicide in Iraq. Post reporters Dana Priest and Anne Hull chronicled her story: how she had a spotless record; how she had been harassed by a superior and how she snapped one night in war-torn Baghdad, pulling a gun on a superior before shooting herself in the stomach. The diagnosis of her psychiatrists that she suffered significant mental illness was brushed aside by her commanders, who saw it as an excuse and pressed ahead with charges. In December a hearing officer sided with the doctors and recommended against a court-martial. To do so, he said, would be "inhumane," but no action was taken. Nor could Lt. Whiteside and her attorneys get any answers. Distraught about her legal limbo, she attempted suicide last Monday, and, with The Post again looking into the circumstances, the charges were finally dropped.

The mishandling of this case is indicative of a military culture dismissive of psychiatric ills as real sickness. Those who seek treatment are too often stigmatized and punished. How else to explain the worry of service members who say they fear being labeled as weak? Think of the message that was sent by the Army's pursuit of Lt. Whiteside and its apparent reluctance to do the right thing.

The case is also a poignant illustration of the dramatic rise of suicides and attempted suicides in the Army. A draft internal study obtained by The Post showed suicides among active-duty soldiers increased nearly 20 percent in 2007, to the highest level since the Army began keeping such records in 1980. The numbers of attempted suicides and self-inflicted injuries also are increasing.
click post title for the rest
Posted by Kathie Costos at 4:59 PM