They are young, strong, physically fit, stunningly sexy hunks. The things they can do with their bodies is simply amazing!

Do I have your attention yet?

Shame on you for not paying attention to these people before this. What's wrong with you? We stand in line and cheer as if it is our patriotic duty to send them off to war. Heck, we even pay attention in the beginning as news crews send in reporters and cameras but that interest soon fades replaced by much more pressing news, like who is on American Idol, what is going on with Brad, Angelina and Jen, or the latest political scandal. War wanes but sex always seems to sell.

American Idol and America's Got Talent captures us because people, regular people are chasing a dream of making it big. We can all relate to that.

We can all relate to love stories like Brad and Angelina but it also helps that both of them are very attractive. Do you think we'd be interested if they were ugly? We can still relate to them because of the human emotions of love.

We can relate to the passing of super stars like Michael Jackson and Farrah Fawcett. It's not that they were ever really out of the spotlight. Some felt they "knew" them and their lives because of all the media coverage they had during their lives.

What we cannot relate to is the men and women in the military and our veterans. We can't because we have to face it, they are not that interesting to the media. They long ago abandoned reporting on events in Iraq and Afghanistan. These are two reports from yesterday.

BAGRAM AIR BASE, Afghanistan -- The urgent call came in: Roadside bombs had ripped through two Humvees and wounded eight or nine U.S. soldiers.

Medevac helicopters immediately hit the air to ferry the soldiers to the main U.S. military hospital. But when they arrived, they carried only five patients.

The other four were dead.


With 2009 expected to be the bloodiest year since the U.S. invaded Afghanistan, medical personnel at Bagram's SSG Heath N. Craig Joint Theater Hospital say they've already seen an increase in casualties and expect more. The flow of dead and wounded puts enormous strain on the soldiers and the medical staff who must face it head on.

"Everything I've experienced is boredom or terror," said Air Force Maj. Adrian Stull, a 36-year-old emergency physician from Beavercreek, Ohio. "And if I have to choose between the two, I'd have to choose boredom, because everyone goes home with all their fingers."

June 1 was a day of terror.

It started when two roadside bombs hit the same convoy of 10th Mountain Division soldiers only a couple of miles apart in Wardak, a province west of Kabul. The damage was so severe that one of the Humvees split in half.
go here for more

BAGHDAD — A bombing Thursday at a bus station in a Shiite neighborhood in southwest Baghdad killed at least seven people, police said, the latest in a series of recent attacks that have left nearly 200 people dead ahead of a U.S. military withdrawal from cities next week.

Another three bombs and a mortar killed two more people around the capital. The U.S. military said nine American soldiers were wounded in two roadside bomb attacks against a convoy in eastern Baghdad. A roadside bomb also killed a man in the northern city of Mosul. The attacks were latest is a series of deadly bombings mostly targeting Shiites in the past week.
go here for more
http://www.armytimes.com/news/2009/06/ap_iraq_bombing_062509/

These stories were linked from http://icasualties.org/oif/

Go there and find out what is going on with our troops if you really support them. 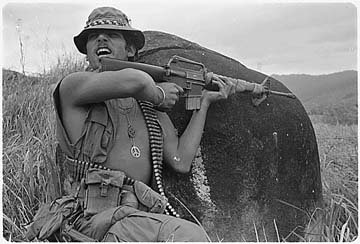 It's not that this is anything new but at least when Vietnam was going on, we had so much coverage it kept us aware that our troops were still risking their lives, getting wounded and dying. What we didn't know was that they would come home with the war deep inside of them just as other generations did. No one cared anymore when they were back home and the protests ended. The media only wanted to report on the bad things some of them did.

This blog, among many more, have been paying attention to Iraq and Afghanistan, along with what happens when they come home. It's not that hard to find the reports, but you have to have the will to look for them. You have to care in the first place. They have to be of a personal interest to you. Military families care. Veterans and their families care. The problem is, the rest of the country is not interested enough. You'd think they would be considering the wounded will be with us the rest of their lives and requiring support from the rest of us. We're going to be left with the shock of the need simply because we didn't pay attention all along and the media, well, they were just too busy reporting on celebrities.
Posted by Kathie Costos at 9:50 AM