COLUMBUS, Ohio — One of the most highly decorated Marines during the war in Iraq had to drink to fall asleep.

He once tried to kill himself.

This was after Jeremiah Workman’s tour in Fallujah, where on Dec. 23, 2004, he demonstrated such extraordinary heroism that he was awarded the Navy Cross.

Workman, a retired staff sergeant, led three assaults into a house where insurgents had trapped other Marines. Injured by grenade shrapnel, he helped save many of those Marines and kill 24 insurgents.

Workman, now 27, originally is from Richwood and was a high-school football player. He tells these biographical details to current and retired Marines, including the ones he has recently spoken with in Ohio.

He still goes to counseling, he says, and he still takes medicine for post-traumatic stress disorder. If a football player, not to mention a Navy Cross recipient, admits that he needed help after a deployment, maybe other Marines will admit it, too.
go here for more
Navy Cross recipient continues to help Marines 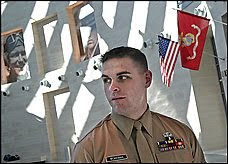 Sgt. Jeremiah Workman was awarded the Navy Cross for his heroism while on duty in Fallujah. "Almost any infantry Marine would have done what I did," he says. (By Sarah L. Voisin -- The Washington Post)

A Hero Who Did not Save Himself
For Jeremiah Workman, Decorated for Bravery in Iraq, the Battle's Not Over Yet

Despite heavy resistance from enemy automatic weapon fire and a barrage of grenades, Corporal Workman fearlessly. . .

Jeremiah Workman stood at attention and tried to listen as the narrator read the citation that detailed what he'd done to earn the Navy Cross, an award for valor that is second only to the Medal of Honor.

. . . Corporal Workman again exposed himself to enemy fire while providing cover fire for the team when an enemy grenade exploded directly in front of him, causing shrapnel wounds to his arms and legs . . .

He was standing on the parade ground, facing a grandstand packed with hundreds of people, including his wife and his mother. Behind him were several hundred Marine recruits who were about to graduate from boot camp at Parris Island, S.C., where Workman had recently lost his job as a drill instructor after he suffered what he calls a "mental meltdown."

. . . Although injured, he led a third assault into the building, rallying his team one last time to extract isolated Marines . . .

When the narrator finished reading the story of Workman's "extraordinary heroism" in Iraq, Brig. Gen. Richard T. Tryon pinned the Navy Cross to Workman's chest and the crowd in the grandstand stood and cheered. It was a moment of well-deserved triumph, but it didn't make Workman feel any better.

"When they put that medal on me, from that point on, I sunk deeper into depression," he recalls. "Everybody says it must be awesome to win the Navy Cross. Well, as a matter of fact, it's not. I lost three guys that day, so for the longest time, I didn't even want to wear it. I'd look down at it and see three dead Marines."
click links for more of these
Posted by Kathie Costos at 10:10 AM