Marine Prayer Request for Darkhorse not what it seems

UPDATE
Looks like Stars and Stripes paid attention too


Don't believe the social media rumors: Camp Pendleton's 'Darkhorse Marines' aren't dying in Afghanistan
By CARL PRINE |
The San Diego Union-Tribune (Tribune News Service) | Published: May 4, 2017
Although thousands upon thousands of well-meaning Americans on Facebook and Twitter are asking people to pray for the 3rd Battalion, 5th Marine Regiment, the grunts aren’t suffering any casualties in Afghanistan. They’re home at Camp Pendleton, preparing to deploy to sea.
The latest hoax seems to have broken out on Facebook in late February before dying down in mid-March. It has come roaring back in recent days, however, triggering a flood of social-media support for the “Darkhorse” battalion that once suffered heavy losses in Afghanistan but isn’t actually in combat now.
“We are asking everyone to say a prayer for ‘Darkhorse’ 3rd Battalion, 5th Marines and their families. They are fighting it out in Afghanistan and have lost nine Marines in four days. Please repost this,” reads the typical message being circulated on social media.

Not sure what to make out of this now. I did a search for more information on this prayer request I received by email. I remembered 9 in a week but not recently so I did some checking. One of the "Marines" listed as killed this week was from the UK and he died in July. Matthew Weikert was in the Army and so was Chase Stanley.

Bomb disposal expert who saved hundreds of lives killed in Afghanistan
By TAMARA COHEN
Last updated at 8:46 AM on 20th July 2010

A bomb disposal expert who saved hundreds of lives in Afghanistan has been killed by a Taliban bomb.
Staff Sergeant Brett Linley, 29, died while clearing explosives on Saturday and was hailed by his military bosses as a 'true hero'.


In five months on the front line with the Royal Logistic Corps, he defused 100 bombs, on one occasion dismantling three in just one hour.

Justin Allen and Justus Bartelt were killed in July


July 25, 2010
The Defense Department last week identified the following American military personnel killed in Afghanistan and Iraq, or who died at a U.S. military hospital of their injuries:

Justin B. Allen, 23, of Coal Grove, Ohio; sergeant, Army. Allen was shot and killed July 18 during a firefight in the Zhari district of southern Afghanistan's Kandahar province, on the Pakistani border. He was assigned to the 1st Battalion, 75th Ranger Regiment at Hunter Army Airfield, Ga.


Army Specialist Chase Stanley, 21, Napa
Soldier is killed by an improvised explosive device in Afghanistan.
MILITARY DEATHS
September 26, 2010|By My-Thuan Tran, Los Angeles Times
Chase Stanley was eager to join the Army. When he was a teenager, his bedroom was covered in Army posters and he often sported an Army T-shirt, said his sister, Britney Stanley. Even before he signed up for boot camp, he would go to extra training sessions.

Growing up in the rugged terrain of the Capell Valley area of Napa, Stanley enjoyed hiking, fishing and hunting with his father. After graduating from Napa High School, he enlisted at age 17, along with two friends.
http://articles.latimes.com/2010/sep/26/local/la-me-stanley-20100926 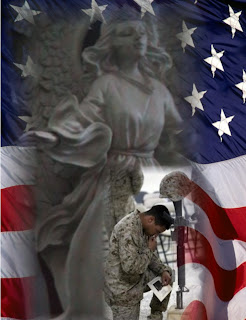 We are asking everyone to say a prayer for "Darkhorse" 3rd
Battalion 5th Marines and their families. They are fighting it out in
Afghanistan and they have lost 9 marines in 4 days. IT WOULD BE NICE TO SEE
the message spread if more could pass it on.

Often Tested, Always Faithful, Brothers Forever.
Nothing in the media about these guys because no one seems to care:

All are Marines that gave their lives for YOU this week.


It looks like the "this week" was back in October and had different names.

• Sgt. Ian Tawney, 25. The squad leader was killed Saturday by an improvised explosive device while on a foot patrol, Marine officials said. He enlisted on March 14, 2005, and had deployed to Iraq in 2007.

• Lance Cpl. James Boelk, 24. The infantry rifleman was killed by an IED while on a foot patrol last Friday, officials said. He was on his first combat deployment.

• Lance Cpl. Joseph Lopez, 26. The infantry rifleman was killed by an IED while on a foot patrol last Thursday, officials said. He was on his first combat deployment.

• Lance Cpl. Alec Catherwood, 19. The infantry rifleman was shot to death while on a foot patrol last Thursday, officials said. He was on his first combat deployment.

• Lance Cpl. Irvin Ceniceros, 21. The machine gunner was shot to death while on a foot patrol last Thursday, officials said. He was on his first combat deployment.

Four additional Marines were killed last Wednesday in the same IED blast while riding in a Mine Resistant Ambush Protected All-Terrain Vehicle, or M-ATV, according to media reports. Those Marines include:

• Cpl. Justin Cain, 22. The machine gunner was on his first combat deployment.

• Lance Cpl. Phillip Vinnedge, 19. The anti-tank assaultman was on his first deployment.

• Lance Cpl. Joseph Rodewald, 21. The machine gunner was on his first combat deployment.

• Pfc. Victor Dew, 20. The anti-tank assaultman was on his first deployment.

Additional details about the deaths were not immediately available, but the Corps said the unit is now based in Sangin in a news release covering the death of Lance Cpl. John Sparks, 23. He was shot to death Oct. 8, becoming the first Marine to die on 3/5’s deployment, Marine officials said.

The most recent Marine casualty announced was Cpl. Jorge Villarreal, 22. A member of Pendleton’s 1st Battalion, 11th Marines, he died Sunday from an IED blast while on a foot patrol.

Posted by Kathie Costos at 8:01 AM