"For those I love I will sacrifice" 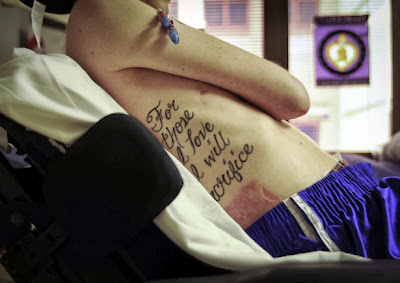 A dance outside in a rain storm, a midnight flight across the country, a dash into a burning home, none of these are outside the realm of what people will do for those they love.

For one 1st Infantry Division Soldier, his love for his family and his country led him into an Army recruiter's office, onto basic training, up the road to Fort Riley, Kan., and around the world to Afghanistan.

And then that love led him right to death's front door.

Pfc. Kyle Hockenberry, 4th Squadron, 4th Cavalry Regiment, 1st Heavy Brigade Combat Team, joined the Army in the fall of 2010 after a summer full of friends, dirt bikes and post high school graduation parties. Joining the Army was the realization of a dream for the young man from Marietta, Ohio.

"I always wanted to serve my country, protect our freedom, to keep the life that all the ones I love live safe," the 19-year-old said recently.

Hockenberry's enlistment wasn't much of a surprise for his parents, Chet and Kathy Hockenberry.

"Being a Soldier was all Kyle ever talked about, even when he was little," Kathy said of her youngest son. "I still have all his G.I. Joe guys that he always used to play with because he didn't want me to get rid of them."

Kyle graduated from basic training in January 2011 and was assigned to the Big Red One's 4th Squadron, 4th Cavalry Regiment "Pale Riders." The Pale Rider team was already busy making final preparations for a deployment to Afghanistan when Kyle arrived and the new Soldier began his own preparations for this upcoming mission -- a mission that would have him leaving Kansas in less than six weeks.

First on Kyle's list of deployment preparations was a visit to a tattoo shop in Manhattan, Kan.

"I had wanted a tattoo for a long time and I wanted to finally get one before we left," he said.

One evening, shortly before the deployment, Kyle and a few fellow Soldiers "went under the needle." One of the Soldiers had his children's names or birth dates tattooed, some had a lucky number or special picture done but Kyle selected a seven word phrase that had been rolling around in his head ever since he decided he was going to be a Soldier.

That night, the tattoo artist etched, "For those I love, I will sacrifice" onto Kyle's right side.

"I thought since I was in the military that it would be a good one to get," he said. "'Those I love' is for everyone -- for my parents, my brother and all my family but it really for everyone in the country."
read more here


"For those I love I will sacrifice" pretty much sums up how they all feel. They are ready to face danger and ready to save a life even if it means they lose their own. If you want to see how much they care about each other, go to the link below and see the pictures going with this article. If you want to know why they are willing to do all of this, read it and know this isn't about killing. It is about caring. 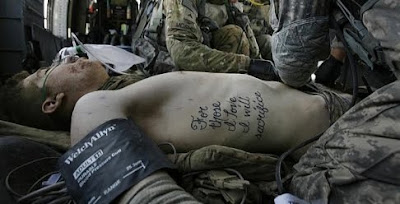 Calm in the midst of chaos is lifesaving protocol for medevac crew in southern Afghanistan
By LAURA RAUCH
Stars and Stripes
Published: August 25, 2011
FORWARD OPERATING BASE PASAB, Afghanistan — It was the worst of places, but the soldiers on the ground had few options when they marked the landing zone for the medevac helicopter. One of their buddy’s legs had been blown off by an Improvised Explosive Device near Pashmul South, and another had suffered a traumatic brain injury from the blast.

Grape rows, tree lines and mud walls surrounded the field. It was the perfect setting for an ambush.

Purple smoke billowed from the landing zone as the crew of Dustoff 59 sped toward a small band of 1st Infantry Division soldiers, waiting with their wounded. As pilot and Chief Warrant Officer 2 Marcus Chambers slowed for the landing, gunfire broke out and the all-too-familiar tat-tat-tat-tat, tat-tat-tat-tat pinged around them.

Chambers set the aircraft down and flight medic Staff Sgt. Garrick Morgenweck flung the door open to retrieve the wounded. As he stepped out, insurgents fired a rocket-propelled grenade from close range, striking a mud wall and narrowly missing the helicopter as it blasted through.
read more here


If you ask a Vietnam veteran why they did what they did, there are several reasons they may give to get you to stop asking them. The honest answer is "we did it for each other" and that is what they are all fighting for today in Iraq and Afghanistan.


Time had an update on this story

Tattoos are as old as war. Lots of soldiers get them, with military motifs, girlfriend's names, or various guns, skulls or dragons adorning their skin. Some get something less ornate. Private First Class Kyle Hockenberry had For those I love I will sacrifice stitched into his flesh. He had no idea how prescient he was.

A member of the 1st Infantry Division, Hockenberry's world changed June 15. He was on a foot patrol just outside Haji Ramuddin, Afghanistan, when an improvised explosive device detonated nearby. In this photograph, by Laura Rauch for the military's Stars and Stripes newspaper, flight medic Corporal Amanda Mosher is tending to Hockenberry's wounds aboard a medevac helicopter minutes after the explosion.

Kyle Hockenberry, 19, lost both legs and his left arm in the blast.
read more here

Posted by Kathie Costos at 6:53 PM