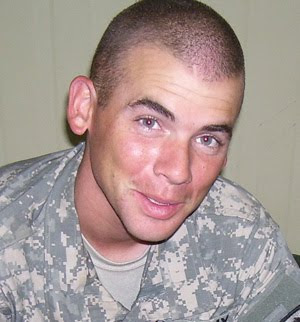 Army medic Kevin Hardin died Jan. 22 of
injuries sustained in Iraq. He and his wife
Lillian received a storybook wedding a year ago
thanks to the Eureka and the Mesquite
community. Photo provided.

Slightly more than a year has passed since the storybook wedding in Mesquite of former Army medic Kevin Hardin to the woman who cared for him at Walter Reed Army Hospital after he was severely injured when a rocket propelled grenade slammed into his Humvee during combat operations in Samarra, Iraq in 2007.

Hardin spent two years in the hospital and was forced to undergo 32 surgeries and a lengthy, painful rehabilitation. During his recovery, Hardin met Lillian May who cared for him through the painful times. Over the course of two years Hardin was receiving medical treatments, the couple fell in love.

In August, 2009, Hardin proposed to May but the reality was he was severely injured including injuries to both arms, a fused wrist and loss of fingers. He also had several pieces of shrapnel in his brain which were inoperable. After being medically retired from the military, he was without a job.
read more here

Posted by Kathie Costos at 7:47 AM