Local veteran in the running to grace the cover of Men's Health magazine
MyFOX Alabama
By Vanessa Araiza
Posted: Jul 24, 2014 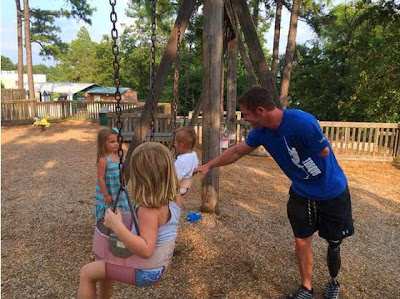 ALABASTER, AL (WBRC)
To his three children, Noah Galloway is just Dad. But soon the Iraq veteran and double amputee may be the very first reader to ever grace the cover of Men's Health Magazine.

In the past, athletes and celebrities have only been the ones to draw readers' attention.

When asked what his children thought of the coveted spot Galloway said they don't see it as a big deal.

"As long as I take them to the park that's all that really matters," said Galloway. "I've tried explaining it to them and they're like, 'Yeah, OK.'"

If you didn't know him or his story you wouldn't know the struggles he's overcome since being injured in 2003 when an IED struck the humvee he was riding in.

"In 2007-2008 if you would have said I was even in the running to be on the cover of Men's Health magazine I would have said you're crazy, there's no way," said Galloway.

Galloway said he's always wanted to be in the magazine he's read for years but it wasn't until the loss of his arm and leg he felt he truly had a story to tell.

"After I was injured and then I got back in shape I always felt like I had a legitimate reason to be on Men's Health because I designed all my workouts. Everything I've done I've done on my own, " said Galloway.

After sinking to his lowest in 2007 and 2008, Galloway took a different approach on life. That new outlook not only put him in great shape but it pushed him and inspired others.
read more here
Posted by Kathie Costos at 6:16 AM