Iraq Double Amputee Goes From Depression to Dancing With Stars 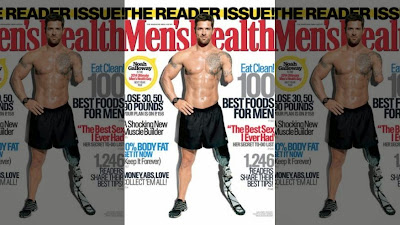 LOS ANGELES – Motivational speaker Noah Galloway is set to become one of the most inspiring "Dancing with the Stars" competitors ever.

But it hasn’t been easy as the army veteran who lost two limbs while fighting in Operation Iraqi Freedom in 2005 hit rock bottom before pulling himself out of a major depression.

“In my second tour of duty in Iraq, I was injured and lost my left arm and left leg” during an improvised explosive device attack, former infantry sergeant Galloway told FOX411 at Tuesday’s DWTS season 20 cast event. “When I woke up in the hospital, it was a struggle.

It was really tough and that bothered me for the first couple years -- and I became out of shape, drank a lot, and would sit around the house.”

But Galloway said thoughts of his three children pulled him out of the funk and he vowed to get back in shape.
read more here
Posted by Kathie Costos at 3:19 PM