Welcome Back The New You
Wounded Times
Kathie Costos
February 20, 2015 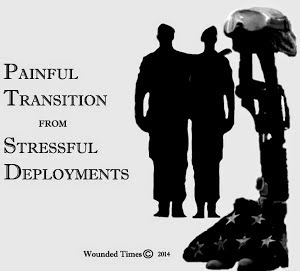 We hear a lot of people say "Welcome Home" to veterans. It sounds nice but would be better to say "Welcome Back" because everything that happens in our lives removes us from where we were and we return changed.

I am not a veteran. I am just an Army brat daughter of a Korean War veteran and wife of a Vietnam veteran. I moved from my home town and returned many times but I changed and so did the place where I grew up.

The house I was raised in belongs to someone else. The first apartment I lived in is occupied by someone else and the first home I bought is in someone else's name. The church I attended all my life until the move has changed so much I hardly recognized it. Home isn't the same anymore. My home now is here and I am a stranger back there.

My experiences changed me little by little. When I was a child I didn't pay much attention to my Dad or my uncles (WWII veterans) because they were there all the time. I just thought it was odd when friends parents didn't serve in the military. As I grew older I understood that I was the odd one in their world.

When I met my husband my life became even odder to everyone else. We were living with PTSD that few talked about. My Dad called it shell shock. Even with that, we've been married over 30 years now.

Veterans bring home their experiences with them and little by little, they changed. How can they return back to families and friends when they didn't take the journey with them? The man/woman walking in the doorway isn't the same person they were when they walked out the door.

Thomas Wolfe wrote about "You Can't Go Home Again" and several parts apply to what is happening today as more veterans return from combat and leave the military.


“Child, child, have patience and belief, for life is many days, and each present hour will pass away.

Son, son, you have been mad and drunken, furious and wild, filled with hatred and despair, and all the dark confusions of the soul - but so have we.

You found the earth too great for your one life, you found your brain and sinew smaller than the hunger and desire that fed on them - but it has been this way with all men. You have stumbled on in darkness, you have been pulled in opposite directions, you have faltered, you have missed the way, but, child, this is the chronicle of the earth.

And now, because you have known madness and despair, and because you will grow desperate again before you come to evening, we who have stormed the ramparts of the furious earth and been hurled back, we who have been maddened by the unknowable and bitter mystery of love, we who have hungered after fame and savored all of life, the tumult, pain, and frenzy, and now sit quietly by our windows watching all that henceforth never more shall touch us - we call upon you to take heart, for we can swear to you that these things pass.”
― Thomas Wolfe, You Can't Go Home Again

This will pass and the pain you feel right now will change but not by itself. Healing from any experience is a constant battle until you defeat it. Take it with you but make peace with it because it is a part of you.

I have been all too hard on myself through every event.  Finding it harder to forgive myself than it was to forgive others, to offer help easier than to ask for it, I learned that the only thing that could defeat me, was me.

“The human mind is a fearful instrument of adaptation, and in nothing is this more clearly shown than in its mysterious powers of resilience, self-protection, and self-healing.

Unless an event completely shatters the order of one's life, the mind, if it has youth and health and time enough, accepts the inevitable and gets itself ready for the next happening like a grimly dutiful American tourist who, on arriving at a new town, looks around him, takes his bearings, and says, "Well, where do I go from here?”
― Thomas Wolfe, You Can't Go Home Again


Where you go from here is up to you as well. If you believe healing is easy, it isn't but then again, the events that set off PTSD were not easy in the first place.

First know who you were back when you decided that you wanted to serve. What made you want to? Was it something you always wanted to do or was it a decision made because something happened? Then ask yourself if it was motivated to give or for what you'd get out of it.

If it was because of what you'd get in return, then take a closer look at why you picked the military since you could have gained a lot more with a lot less dangerous profession. Look deeper. The hardships you were willing to accept to be part of this minority had to have been motivated by a deeper reasoning.

Then what were you trying to achieve risking your life with others? Easy bet it was to get as many as possible back home with you. Safe bet to think that your family motivated you as well.

Then take all the events that happened, the good as well as the bad because the good ones are important but mostly outweighed by the bad stuff. Easy to say that God wasn't there and then you could blame Him but then again, if you remember things they way they happened, you'll see He was all around you.

Look at everything that happened then accept your power to change any of it was gone the second it was over as much as you accept the fact your power was even limited back then.

Give yourself superhuman powers and take the event without any limits on what you could have done. Then understand that superhuman powers were not really within you and you did the best you could at the moment you had a chance to do anything about anything. The outcome was out of your hands but the future is.

None of you are frozen or condemned to suffer. Fight back to change tomorrow with the same determination you had to go from civilian kid to soldier. That wasn't easy but you came out after training stronger. You can come out of this stronger too.

Forget about forgetting but start to plan of taking power away from yesterday. It is a part of you but that doesn't mean it is supposed to suck the life out of you or control what you can become.

Then take tomorrow as the beginning of the journey back to home. Familiar but different territory you have to explore to get comfortable with.

Take the past and make peace with it instead of trying to escape it. It is all part of you but while you can't change it, you can change what it keeps doing to you.

This is one of my old videos from 2006, so the numbers are lower than now, but the idea is the same. You can come out of the dark. So work on it and then welcome back the new you.

Having PTSD and not knowing what it is, is like living in darkness. Nothing seems the same. When you know what it is, you can begin to heal the wounds you brought back home with you.

Posted by Kathie Costos at 6:40 PM