How Can They Expect We Care if We Repeat a Lie?
Wounded Times
Kathie Costos
March 10, 2016

There is a huge difference between a mistake and a lie.  When the subject is the number of veterans committing suicide instead of healing, we can't afford either one.  How the hell can any of us expect them to believe we care enough if we keep repeating the same lie of "22 a day" commit suicide?

Too many don't even care enough to learn the basics and even less care about what has already been done over the last 40+ years.  I thought I'd seen it all in the 80's but this is beyond what should ever be acceptable to anyone!

They know the truth far better than all these "awareness" raising running around the country but since we waste so much time on the bad results too many can't even get right, we're not talking about how many survive their attempts, what it does to their families or the biggest thing of all, the simple fact that they can heal instead of suffering to the point where they would rather die than try.

On Stars and Stripes there is a article you should read. VA aims to improve beleaguered suicide prevention efforts but we've heard it all before and before that and before that. 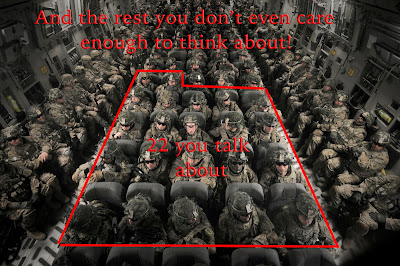 "A dearth of reliable veteran suicide data has been a persistent problem for the VA. The oft-cited statistic that 22 veterans commit suicide each day is based on a four-year-old report that cautioned the number might be inaccurate. A more recent study put the rate of suicide among Iraq and Afghanistan veterans at roughly one per day, still 40 to 50 percent above the rate of the rest of the country."

Actually that is about current military and not "veterans" that everyone keeps talking about. 3rd Quarter 72 Active and 70 Reserves But when you look at the second quarter you'll see these numbers are worse compared to other years but only if you factor in there are less serving than during the other years. There are over 900 attempted suicides as well, but why count them? 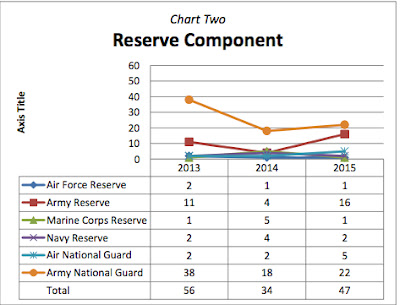 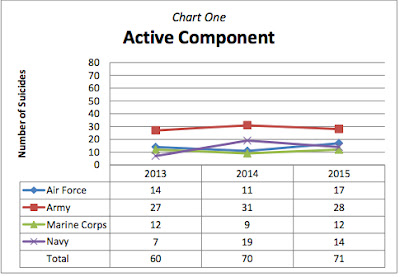 "VA officials said they have been working with the Department of Defense and the national Centers for Disease Control and Prevention to come up with definitive suicide statistics from 1979 to 2014, which they hope to release in June."

This is a copy of a post Wounded Times published back in 2013.

We need to start getting some answers on how Veterans charities are taking in a billion a year while the number of suicides go up, attempted suicides go up and veterans all over the country are discovering being back home is worse than combat. We need to start getting some answers from the military on how they spend a billion a year, or more, on prevention and "resilience" training when all the numbers in all branches contain more suicides and attempted suicides within the military as well as when they come out and become veterans. Yes, we can tie the majority of the suicides of veterans to the same "troops" trained by the FUBAR programming that started in 2006 and morphed into "resilience" training in 2009.

We need answers because these are the results of what they have been getting away with for far too long.

"Oklahoma veterans and active-duty military personnel are killing themselves at twice the rate of civilians, despite increased efforts to address the problem."

"The rate of suicide among military veterans in Arizona is more than double the civilian rate. Advocates say veterans need more than benefits when returning from war. The average veteran suicide rate in Arizona from 2005 through 2011 is almost 43 deaths per 100,000 people. That’s according to data compiled by News21, a national reporting project based out of Arizona State University. And the rate should increase as more veterans return home."

Last week in Montana a 62 year old veteran went to the VA, entered the men's room, pulled out a gun and shot himself in the head. That same night over in Lubbock, a Marine veteran was taken into custody by a SWAT Team standoff.

In Massachusetts a veteran with PTSD got into his truck and drove it into a convenience store. This was captured on video.

In Washington DC Army Staff Sgt. Ty Michael Carter received the Medal of Honor for saving lives in Afghanistan but he has also been trying to save the lives of other veterans like him with PTSD. This came a day after the Department of Defense released the Army suicide report. As of the end of July 94 soldiers, 58 Army National Guardsmen and 32 Army Reservists committed suicide. All of this comes after the Pentagon spent over $4 billion on mental health.

Danny Weiss, a 2004 graduate of Naperville Central High School, killed himself in 2012 after three deployments in the Army.

There is a great piece on the Huffington Post about military suicides. They could have saved tax payers $677,000 that went to the University of Kentucky to study how families feel after suicide. Yes, you read that right. The problem is while veterans charities have become a billion dollar a year industry, the government has been spending over that every year and it is almost as if they haven't paid any attention to all of this at all. Army Specialist Cody Baker of Kentucky, an Iraq War veteran committed suicide August 19, 2013.

"The tragedy of suicide is not only the loss of an individual, but the profound grief that is left when someone chooses to die by suicide. This summer, The Huffington Post asked relatives of military members and veterans who died by suicide to tell their stories. They are mothers, fathers, grandfathers, men and women, ordinary Americans who are, as one put it, members of a group you never want to be part of. They hope their stories will help other suicide survivors find comfort, and will convince those at risk of suicide to seek help now."

Master Chief David Ellingson sat down with his wife to watch a movie, went into the bathroom and shot himself in the head. The community is holding an event "Coming Out of the Dark" but no one seems to have their high beams on. Families blame themselves because no one told them what they needed to know to help these men and women heal. How do they go from wanting to stay alive during combat, doing everything possible to save the lives of their buddies, to coming back home and not wanting to live one more day?

My God! Has any of this sunk in? Back in the 70's and 80's there were plenty of excuses when Vietnam veterans were coming home and killing themselves. The last study done on them found 200,000 had committed suicide but that was in the 90's. In 2007 this came out, "Up to 80% are older veterans who served in Vietnam and Korea and suffer from anxiety, anger or depression." This was followed by this piece of news. "In the past 18 months, 148,000 Vietnam veterans have gone to VA centers reporting symptoms of PTSD "30 years after the war," said Brig. Gen. Michael S. Tucker, deputy commanding general of the North Atlantic Regional Medical Command and Walter Reed Army Medical Center. He recently visited El Paso."

I've seen way too much damage done in my own family. I almost lost my husband. We lost his nephew to suicide. They were the same age in Vietnam. It happened before September 11th, before troops were sent into Afghanistan and Iraq and long before the military was doing something about suicides. As much as I blame myself for not being able to get Andy to listen to me it haunts me every time I read another report on another suicide or hear from a family member blaming themselves. It hurts even worse to know how no one is being held accountable. We ran out of excuses a long time ago.

"NEW YORK CITY, September 7, 2005—A ground-breaking study conducted by Dr. Joseph Boscarino, a Senior Scientist at The New York Academy of Medicine and Associate Professor of Medicine at Mt. Sinai School of Medicine, found that U.S. Army Vietnam veterans with posttraumatic stress disorder (PTSD) had twice the rate of post-service deaths 30 years after military service, when compared to other veterans."

Although veterans make up only 8 percent of the state’s population, they accounted for more than 25 percent of its suicides, according to the report.

I don't know about you but they should have meant a hell of a lot more than being represented by "just a number" as the oblivious snap back with when confronted with the facts.

Nothing has changed because too many have been treated like they do not exist by the same folks pretending to be "doing something" while they couldn't even be bothered to pay attention to all of them.

Posted by Kathie Costos at 3:42 PM