Sanders: VA Must Not Be Privatized 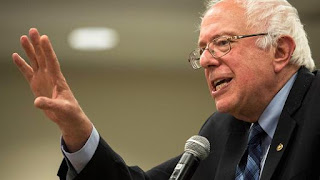 WASHINGTON, Dec. 30 – Sen. Bernie Sanders (I-Vt.), a former chairman of the Senate Committee on Veterans’ Affairs, issued the following statement Friday in response to reports that President-elect Donald Trump is considering privatizing the Department of Veterans Affairs:
“Privatizing the VA would be an insult to the more than 22 million veterans who risked their lives to defend our country and it would significantly lower the quality of health care they receive. Our goal, shared by The American Legion and other major veterans’ organizations, must be to improve the VA, not destroy it. When men and women put their lives on the line to defend us, the president must listen to them, not to the Koch brothers and their extreme right-wing, anti-government ideology. We will vigorously oppose any and all efforts to privatize the VA.
“The president-elect should listen to American Legion Executive Director Verna Jones, who recently said the nation’s largest veterans’ organization ‘would like the Trump administration to know that we value our Department of Veterans Affairs’ because ‘dollar-for-dollar, there is no better care or value available anywhere in the United States – period.’
“The president-elect should listen to the Veterans of Foreign Wars. ‘Politicians, pundits and politically-motivated organizations are using the national crisis in access to care at the Department of Veterans Affairs as justification to dismantle and privatize the VA health care system, with some even proposing that veterans be charged for their service-connected care. The VFW says no! Veterans must not stand idle as politicians who never served or use the VA health care system dictate when and where veterans can receive care.’
“The president-elect should listen to Paul Rieckhoff of the Iraq and Afghanistan Veterans of America who said, ‘The worst case scenario within the vets community is a total dismantling of everything they worked generations to create. There is a growing fear it is all going to get burned down.’
“The veterans’ organizations are right. We must protect the VA, not destroy it.”
Posted by Kathie Costos at 7:58 AM