How much do you really care about veterans committing suicide?

Can You Prove You Really Care?
Combat PTSD Wounded Times
Kathie Costos
May 23, 2017

How much do you really care about veterans committing suicide if all you do is pass on links to stunts and bypass what actually works? Do you have a clue you are actually part of the problem?

The first time I read anything on PTSD, it was almost 35 years ago. I didn't just start thinking I should be the one to do something about it. After all, the only veteran I was concerned about was the one I fell in love with. It was entered into selfishly, as if my life depended on what I could learn about it.

I didn't write about it until after two years of research and that was back in 1984. The steps I took is what is missing in all of this easy bullshitter claims of raising awareness and frankly, Social Media is to blame for being deaf, dumb and blind, yet somehow got the impression no one was doing anything before they came along.

All these years later, it is oh so clear that if it isn't on Facebook or any other social media site, it must not exist. With every resource in the palms of their hands, hardly none actually know how to use what they have. We had to actually go to the library. But then again, the effort was worth it because we cared enough to do it.

There are some involved with groups publicizing veterans committing suicide, yet for whatever reason, did not get the help they needed to fight one more day.

Man who fought suicide among veterans loses fight with PTSD
By KSLA Staff
Friday, May 12th 2017

The graduate of Southwood High School in Shreveport was injured in 2005 while serving in Iraq.

After his release from the military, he suffered from Post Traumatic Stress Disorder.

Adams then became an advocate for 22Kill.

But last week he lost his battle with PTSD.
read more here

So much for a decade of raising awareness of something veterans already know how to do...die, but not tell them how they can heal or the simple fact why they deserve to give themselves a fighting chance.

Sorry but as you know, I ran out of patience a long time ago for all this crap. Most of us falls at the keystrokes of social media users doing nothing more than using these veterans for their own self-gratification. Do they really think they accomplished anything for our veterans? Evidence is in and they haven't.

Then we have Congress writing Bill after Bill and using our tax dollars to fund stuff that doesn't work, or in too many cases, actually makes it worse. Who do Congressional hacks blame? Themselves? No, they blame the VA even though they have jurisdiction over the VA.

And then there are those who do seek help, but expect it to be ready for them when they want it to be. In a prefect world, we would value veterans enough to make sure the VA was ready for all of them, or at least, a substitute place for them to turn to.


'It shouldn't be this hard to get help': Army vet sought mental health care before murder-suicide
AL.com
BY ASHLEY REMKUS
May 22, 2017


"They said they would send him some paperwork to fill out," Johnson said. "They said if he was feeling suicidal he should go to the emergency room. At that moment, he wasn't feeling suicidal. He just knew he was struggling with PTSD and depression."

Just days before Joshua Stiles fatally shot his wife and took his own life, the 30-year-old Army veteran from Alabama sought mental health treatment, only to be turned away.

"It shouldn't be this hard to get help," said Stiles' sister Jennifer Johnson. "He was trying to get help to be a better person, a better husband, a better man, a better father."

Stiles had been suffering with PTSD, depression and anxiety for years before he shot his 22-year-old wife, Brittney Stiles, in front of her sister and their 2-year-old daughter, Mary Jane, in Russellville. Josh Stiles fled the scene and killed himself after a police chase this past Tuesday, according to authorities.

Johnson said her brother contacted a mental health treatment facility in Russellville several days before the murder-suicide but was told he would have to make an appointment.
read more here 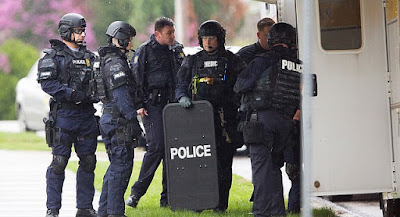 Lawrence police officers were familiar with Kewley, according to a recently released arrest affidavit. They were aware that he is a veteran who reportedly served time in special forces and suffers from post-traumatic stress disorder, night terrors and blackouts.
When Michael Kewley surrendered himself to officers, police say they found several loose rounds of .45-caliber ammunition in his pocket.
Across the street, Kewley's neighbor found another bullet on his kitchen floor and several bullet holes in his home. read more here

But it isn't just veterans...


Suicide: Cops’ silent hazard brought home
FROM THE EDITORIAL BOARD
May 22, 2017


“There’s a lot of people, myself included, wondering what we could have done for him,” said Zaro, the Lakewood chief, “but I don’t have that answer.”

The badge may be small, but the weight is heavy.

When in the span of three weeks, two local law enforcement officers take their own lives, it gets our attention. We also hope it sparks conversation about how psychological strain places our men and women in uniform at risk of damage that no bullet-proof vest can guard against.


Increasing suicide rates among first responders spark concernTribLiveWES VENTEICHER
But not even his parents saw how deeply his work affected him until he took his life seven years later.
"My son was a classic case of 'I'm never going to tell anybody; if I tell them, they'll think I'm weak,'" said Redner's mother, Jacqui Redner, 48, of Levittown, outside Philadelphia.
Like many first responders dedicated to saving lives, Redner, who was 27, never talked about his struggles, she said.
Her son, who went by "Georgie," threw himself in front of an Amtrak Acela train the morning of Aug. 1, 2015, at a station near the family's home.
Suicides among first responders, often driven by emotional strain in a culture that long has discouraged showing weakness, are too common, according to organizations that track the deaths. read more here

If you aren't sufficiently pissed off yet, then you haven't been paying attention. The most overlooked thing in all of this is, all of them decided the lives of others mattered so much, they were willing to die to do their jobs...but didn't know how to fight for themselves when it was their lives on the line. Top that off with the ones they worked with, were also risking their lives on their own jobs.