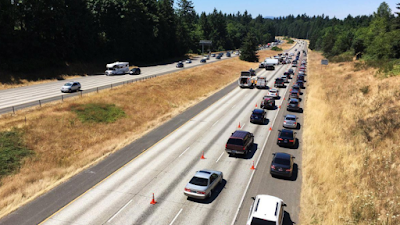 Authorities have identified a man fatally shot by a Washington State Patrol trooper Saturday along Interstate 5 who allegedly had called 911 and requested "suicide by cop" before threatening the officer with a knife. (Photo: KOMO News)

LACEY, Wash. (AP) - Authorities have identified a man fatally shot by a Washington State Patrol trooper Saturday along Interstate 5 who allegedly had called 911 and requested "suicide by cop" before threatening the officer with a knife.
The Olympian reports 22-year-old National Guard reservist Michael Rude of Kent was shot by a trooper on the freeway in Lacey.
Thurston County Coroner Gary Warnock said Monday that an autopsy shows Rude died of gunshot wounds to the chest and abdomen with internal bleeding.
read more here
Posted by Kathie Costos at 5:45 PM