Overall, about 300 Marines have been affected by a week-old outbreak of the diarrheal illness. 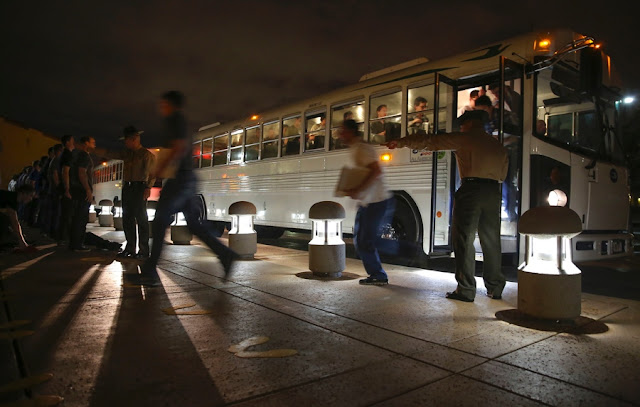 U.S. Marine Corps drill instructors with Receiving Company, Support Battalion, welcome new recruits to the depot as they get off the bus and step onto the yellow footprints during receiving at Marine Corps Recruit Depot San Diego, Calif., Jan. 19, 2016.ANGELICA ANNASTAS/U.S. MARINE CORPS

SAN DIEGO — The Marine Corps says 69 recruits in Southern California are being treated for apparent exposure to E. coli and nine have developed a serious complication.
Those being treated Friday include 14 new cases among some 5,500 recruits at Camp Pendleton and the San Diego recruiting depot. The military says nine developed hemolytic uremic syndrome, a problem that can cause anemia and kidney damage.
read more here
Posted by Kathie Costos at 6:16 AM