Kinney, of Middletown, delayed his college education to enlist in the Marine Corps, serving in Vietnam in 1966-1967. Upon his return he joined the VFW, American Legion and Disabled American Veterans and has assisted in performing more than 1,000 military funerals. He was inducted into the Chapel of the Four Chaplains Legion of Honor in 2016. 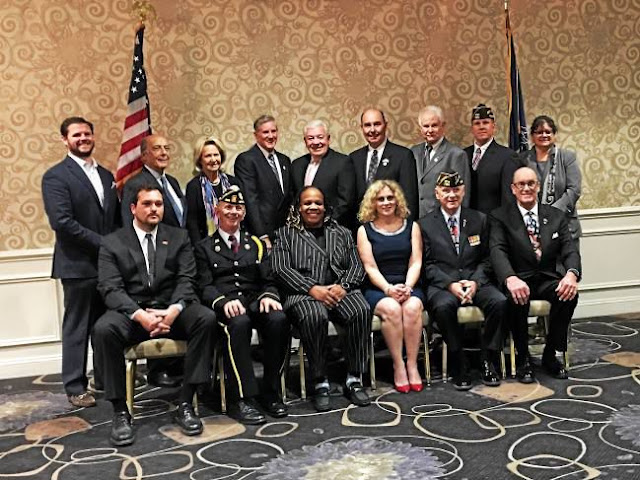 SPRINGFIELD  Honoring America’s veterans should not be limited to the eleventh day of the eleventh month.
The Delaware County Veterans Memorial Association and Delaware County Council insure that respect is year-round.
More than 500 local residents joined Thursday night for the fourth annual Freedom Medal Award dinner. The event at Springfield Country Club provided an Olympic-style podium to congratulate dedication to country recipients Marty Costello, Jennifer Jones, Bill Kinney Jr., Jerry Sweeley and Sean Sweeney, Dr. Tina Kane (dedication to education), the Videon family (dedication to community) and Delaware County Councilman David White (president’s award).
“This is an opportunity to honor our heroes for their service and sacrifice,” said Army veteran and association board President Guy Fizzano. “It is also a chance to thank our donors, who support the memorial’s upkeep and its educational programs.”
This year’s honorees represent the best of the Army, Navy and Marine Corps. Costello, of Radnor, enlisted in the Navy in 1976 and served as an aircraft mechanic with Attack Squadron 82. He has dedicated numerous hours to local veterans’ organizations and their causes, including as commander of the Delaware County American Legion committee, and worked to rebuild and rededicate the war memorial in his home town.
read more here
Posted by Kathie Costos at 10:15 AM