Helping veterans get motivated, and moving, goal of fund founder


"In Iraq, you know who your friends were and who your enemies were," (Paul Bunn) said, crossing his arms over his chest. "When I came back here, it got hard to tell." 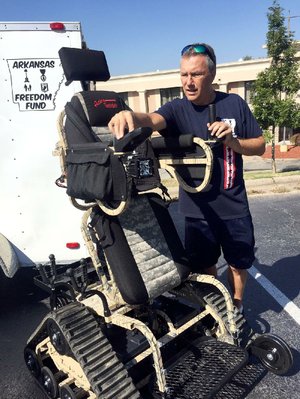 PHOTO BY GINNY MONKMark Leonard is one of the founders and organizers for Arkansas Freedom Fund, a nonprofit aimed at getting veterans moving. The Arkansas Challenge Ride is its biggest event.

Mark Leonard approached a veteran wearing an American flag T-shirt and paused on his way to set up more registration signs for his organization's biggest event of the year.
"I want you to sit on this one here or that one there because I want you to have a new bike," Leonard said, pointing to two recumbent bikes sitting under a tent. "I want you to go faster."
Paul Bunn, a veteran who is getting ready to participate in a 24-mile bike ride, hugs Leonard and starts adjusting his new bike -- an eight speed instead of a three speed.
Leonard, 59, is one of the founders and organizers for Arkansas Freedom Fund, a nonprofit that works to get veterans active. The Arkansas Challenge Ride last month is its biggest event, Leonard said.
This year's ride was Bunn's second time to participate. He is an Army veteran who served one tour during the Persian Gulf War and one in Iraq. He returned with post-traumatic stress disorder that made venturing out into crowds difficult.
read more here
Posted by Kathie Costos at 7:11 AM