Reclaiming Remembrance: 'I thought it was a white event'


"I think it reduces hate between communities and helps community cohesion. If soldiers of different faiths could fight side by side 100 years ago, why can't we get on as community groups now?" Dr. Ifran Malik

Remembrance serves as a way to honour those who gave their lives for Britain in conflict, including during the two World Wars, but do all those who fought get the recognition they deserve? 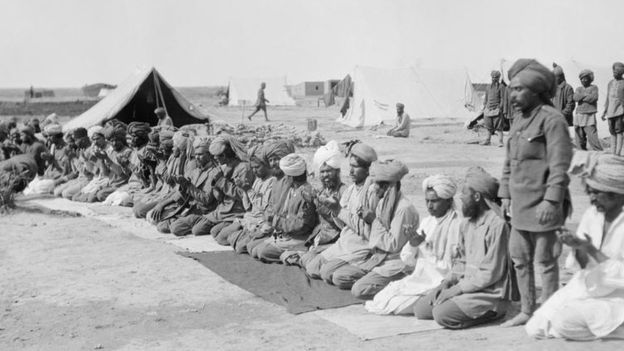 Muslim soldiers offering prayers during World War One
It was a conversation with a patient researching the Commonwealth contribution to World War One that sparked Dr Irfan Malik's interest in finding out about his ancestors.
"Before I knew how much the Indians had contributed, growing up I thought it was very much a white war," he said.
"We weren't taught about the Indians in school."
It's a sentiment researchers at think tank British Future regularly come across in their efforts to highlight Muslims' participation in World War One and Two.
Some 1.3 million Indian soldiers who fought in the WW1, of whom 400,000 were Muslim. In World War Two, about 2.5 million Indian soldiers took part, including 600,000 Muslims.