What Happens To Betrayed Veterans?

One more thing some think about on Veterans Day, is the day they got kicked out and became part of the forgotten veterans we never acknowledge.

If you were kicked out of the military for having PTSD or TBI, you are far from alone! If your family doubts what you've been telling them, show them this!

To everyone else, what do we owe to the men and women kicked out of the military because they received the "unseen" wounds of PTSD and TBI?

That is yet one more thing we never really talk about when we read about the numbers of veterans we think committed suicide on any given day.

We don't think about the data the VA is missing from their suicide counts, like some states do not track military service, and were not included in on any count.

What makes that even worse is when someone served in the military but ended up kicked out and left out of all accounts. How many of these veterans decided to commit suicide?


GAO: DOD HEALTHACTIONS NEEDED TO ENSURE POST-TRAUMATIC STRESS DISORDER AND TRAUMATIC BRAIN INJURY ARE CONSIDERED IN MISCONDUCT SEPARATIONS
Our analysis of DOD data shows that 91,764 servicemembers were separated for misconduct from fiscal years 2011 through 2015; of these servicemembers, 57,141—62 percent—had been diagnosed within the 2 years prior to their separation with PTSD, TBI, or certain other conditions that could be associated with misconduct.

More specifically, 16 percent, or 14,816 of the 91,764 servicemembers who were separated for misconduct, had been diagnosed with PTSD or TBI. The 57,141 servicemembers who were separated for misconduct and diagnosed within the 2 years prior to separation with PTSD, TBI, or certain other conditions had, on average, 4 years of active military service. Almost all, or 98 percent, were enlisted servicemembers, rather than officers, and two-thirds had not been deployed overseas within the 2 years prior to separation. 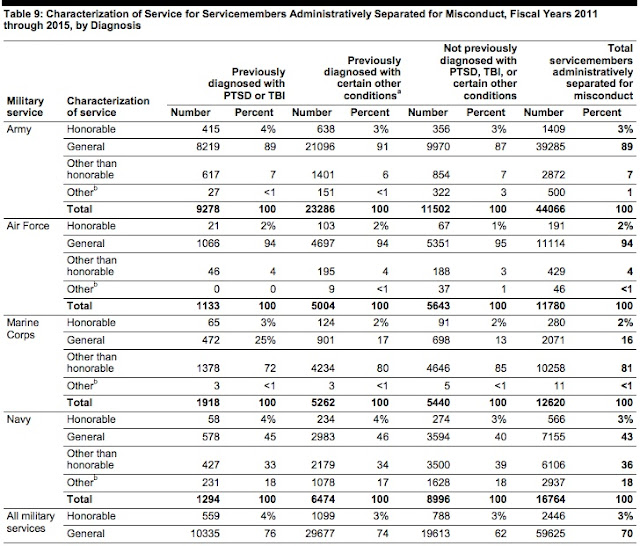 We will probably never know what we let happen to them after they were willing to die for the sake of others.

It is bad enough most of the charities should be sued for deceptive advertising when they avoid mentioning most of the veterans committing suicide are over the age of 50, which they heartlessly ignore, but they dare to talk about PTSD as if it didn't exist until now.

Some talk about 1 out of 5 OEF and OIF veterans with PTSD but none talk about how it was 1 out of 3 Vietnam veterans.

One more thing we don't talk about when Vietnam veterans are being pinned and given parties, is that there were,

"... approximately 250,000 Vietnam-era veterans received less-than-honorable discharges, and as many as 80,000 of those service members could be eligible for PTSD-related benefits.

Posted by Kathie Costos at 5:07 PM