There are only 29 dogs across the country with this ability, according to Kim Hyde, a manager with Southeastern Guide Dogs. 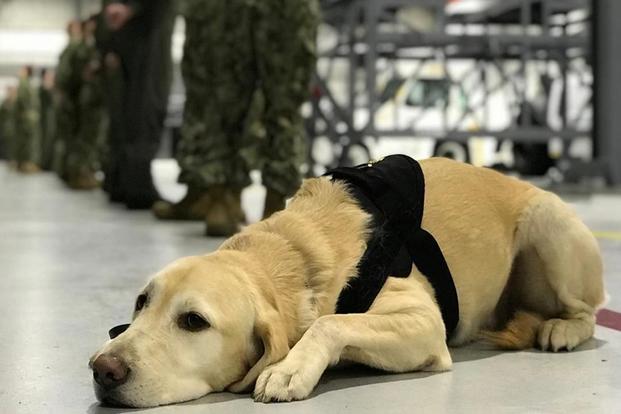 Sr. Chief Brad posing for the camera on Joint Base Andrews. (Fox News)
Every day, Senior Chief Brad greets sailors and Marines as they enter a military clinic for their regular doctor's appointments. Throughout the day, he makes his rounds and visits patients sitting in the waiting area, cuddling with them briefly. If he senses they are down, he takes action.

As suicides across the military have steadily increased since 2013, according to the Department of Defense (DOD), a naval clinic on Joint Base Andrews in Maryland has found a secret weapon to sniff out military members dealing with extreme stress -- a dog.

When Senior Chief Brad senses someone is down, he instantly alerts his handler, Chief Bobby Long. Long, a medical technician, counsels the patient to figure out if they need professional help.

"People that need a little extra attention or are maybe showing signs of irritability, stress, depression, whatever it could be; he will really focus in on that person and then he wants my attention," Long said. "Some of the science behind that shows that dogs can pick up on pheromones that people emit when they are highly stressed and some science points to body language, cues that people leave."
read more here
Posted by Kathie Costos at 3:51 PM