Asheville Veterans: Is this your car in a book?

When you go to the VA and let a valet park your car, the last thing you think about is, he is going to take pictures of your personal property and put them into a book. Well, that is exactly what happened.

What gave him the right as a VA employee to take thousands of pictures of the inside of your vehicles? Read the story because it shows how he "had to work fast" to not be caught by other employees. AND HE IS ACTUALLY PROUD HE DID IT?


This one has paperwork and a gun on the seat! 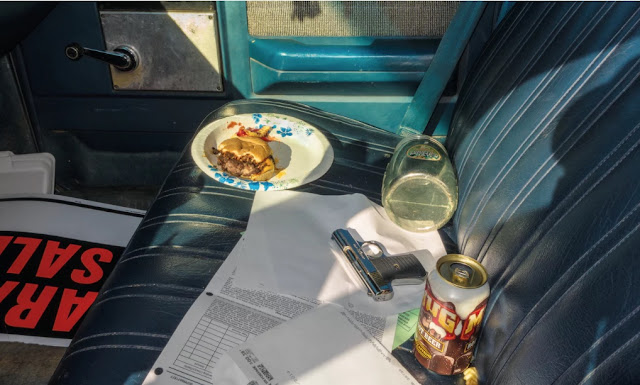 The car’s the scar: photographs of US veterans’ interior lives
The Guardian
Sean O'Hagan
March 10, 2018


Casteel worked as a valet parker at the hospital for seven years, during which time he took thousands of photographs of the car interiors using a small camera, working fast so as not to be detected by his fellow workers.

‘The car is an enduring symbol of America’: an image from American Interiors by ML Casteel. “When I was growing up in south-west Virginia, it was ingrained in me to thank a veteran if I met one,” says Matthew Casteel, a 37-year-old photographer who works under the name ML Casteel. “That was the norm back then, the understanding that they had made a huge sacrifice for the country. Somewhere along the way, that has changed. Their plight has gotten lost in the bureaucracy of government.”

Casteel’s new book, American Interiors, is a compelling indictment of the way in which US war veterans, the wounded and the war-weary, are often treated on their return to the homeland that demanded that sacrifice of them. What is audacious about Casteel’s approach is that there are no portraits of veterans in the book. Instead, while working as a valet parker at a veteran’s hospital in Asheville, North Carolina, where he now lives, he began surreptitiously shooting the interiors of their cars. The result is a grimly powerful, extended metaphor for the neglect and decay that makes their daily lives at home a dogged extension of their lives at war.
read more here
Posted by Kathie Costos at 4:38 PM