Joseph Dwyer lost battle for his own life, but more saved because of him

This is the famous picture of Joseph Dwyer, 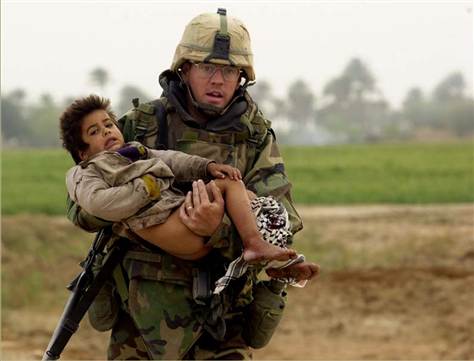 And this is what came after he lost his battle to save his own life.

Veterans across New York are voicing their support for the Joseph P. Dwyer Project and rallying to adopt the peer-to-peer veteran support program as part of the governor’s executive budget.

The Joseph P. Dwyer Project is a peer-to-peer initiative that provides aid to veterans by linking them up with other vets. Veterans across the state continue to advocate for the project due to its success at providing needed aid to those who’ve served in the military.

According to the project’s website, “the Joseph P. Dwyer Project is a Senate funded initiative which provides peer-to-peer, vet-to-vet support for veterans struggling with PTSD and other issues due to combat experience and other military service-related violence.”

Joseph Dwyer was a combat medic who served in Iraq and gained fame for a photo that documenting him cradling a wounded Iraqi boy. Dwyer suffered from PTSD and drug addiction after returning home, and his behavior became increasingly erratic and dangerous. He died from a drug overdose in 2008.

The Dwyer Project is not a part of the governor’s budget. For the past two years the Senate has reallocated funds to provide Dwyer with $3.1 million annually, which amounts to a minimum of $185,000 for each county chapter. Adding the Dwyer project to the state budget would save this reallocation step and provide a permanent source of funding for the project.

Sen. Joe Addabbo, D-Ozone Park, wants to double that figure by adding $6 million to the budget to continue to grow the Dwyer Program into the five boroughs of New York City.

“[The project] has a proven track record,” Addabbo said. “When it comes to veterans there is no place for politics.”read more here

Posted by Kathie Costos at 4:25 PM