“Eight brothers, from the wars of far-off Asia to the shores of Tripoli. These men from all the ages stood tall for all to see. Today, we call them brothers, for with honor they did serve.” Michael Decker, a decorated Navy veteran of Vietnam 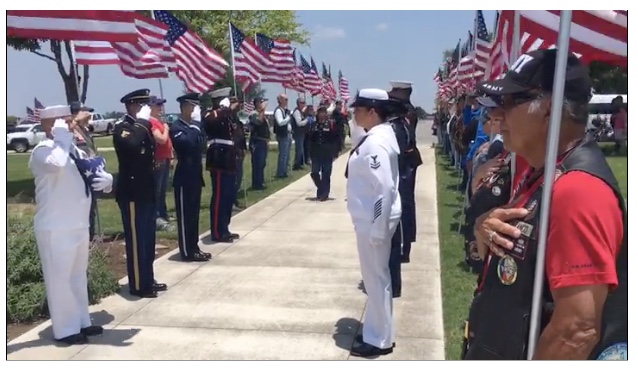 The homecoming was years in the making, in some cases decades, but on Friday, eight veterans were welcomed to their final resting place, the roar of three dozen motorcycles trumpeting their arrival at Fort Sam Houston National Cemetery.

The cremated remains were out of storage at last, escorted into town by state troopers, San Antonio police and Bexar County sheriff’s deputies after a ride of more than 500 miles across West Texas, to be interred with full military honors.

Veterans usually get such treatment days after their deaths surrounded by family, but not these men. They died with no one to claim them and were placed in the basement of the Potter County Courthouse in Amarillo.

Posted by Kathie Costos at 3:20 PM