Suicide Awareness is not suicide prevention!

People seem to be under a delusion that "suicide awareness" is important. None of them can explain what the purpose actual is.

Do not be under the delusion that suicide "awareness" has anything to do with prevention. It does not! All it does is offer a veteran who is contemplating it, that many others gave up on themselves.

Talking about veterans killing themselves, is something they already know how to do. Still, those who defend the stunts, claim it is not a harmful, while being unable to explain how it is helpful to anyone. 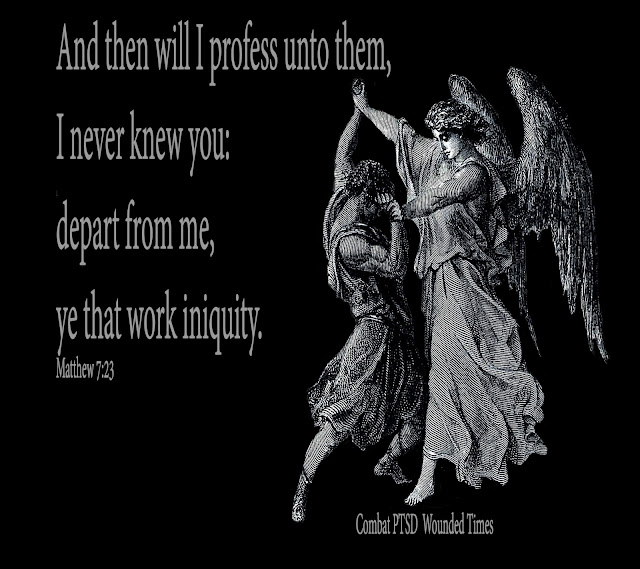 
Not every one that saith unto me, Lord, Lord, shall enter into the kingdom of heaven; but he that doeth the will of my Father which is in heaven.

And then will I profess unto them, I never knew you: depart from me, ye that work iniquity.

A simply analogy: you find the courage to open up to a friend about something that is seriously grieving you.

Then they respond with, "That happened to someone I know and they killed themselves."

That robs you of hope.

Yet when they respond with, "Someone I know went through the same thing. They got help and they are happier now." That restores hope.

Do no dare think that thousands of groups all over the country, calling attention to veterans killing themselves, have invested anything into changing the outcome. It is so easy to repeat a number, without knowing where that number came from, or how many more have been uncounted.

What is hard, is gaining the knowledge, and doing the work to actually restore hope. Show them that support from others can lead to healing.

When they are shown they were not worth the simple gesture of reading the reports the awareness raisers failed to do, their thoughts of being worthless are reenforced.

When they are shown that they do matter to others, then there is healing.

In 2015, a report came out on the cost of suicides. What was stunning is that attempted suicides also came with a heavy price.

Suicide and Suicidal Attempts in the United States 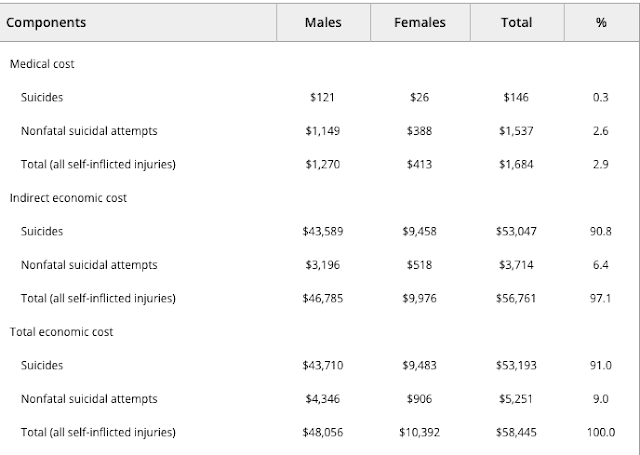 Some of the workers of iniquity get caught.


ORLANDO, Fla. - A nonprofit led by former Orlando mayoral candidate Neil "Paul" Paulson Sr. misled people who donated more than $20 million to his charity thinking the funds would go toward helping provide services to veterans,  Attorney General Pam Bondi said.Paulson and his nonprofit Help the Vets Inc. recently settled with Florida, California, Maryland, Minnesota, Ohio and Oregon, in a lawsuit that alleges that between 2014 and 2017, Paulson collected donations across the U.S. "based on misleading promises that the donations would assist veterans by providing funding for grants, medical care, a suicide prevention program, therapeutic family retreats and similar programs," according to a news release from Bondi's office.

Fake charity pledged to fight veteran suicide. Instead, it kept millions of dollars.

Ten veterans charities that allegedly misused millions of dollars in donations are facing sanctions from California amid a nationwide crackdown on organizations that appear to manipulate the public’s goodwill for military service members.The biggest alleged offender was Help the Vets, a charity that reportedly misused $20 million it raised over four years and did not make good on its promises to help veterans.Some of its fundraising appeals promoted a veteran suicide prevention program that did not exist, according to an injunction released by the Attorney General’s Office and the Federal Trade Commission.The charity’s promotions used urgent language, such as, “22 VETERANS WILL DIE EACH DAY UNLESS WE DO SOMETHING.” The number refers to Department of Veterans Affairs studies that estimate 20 to 22 veterans take their own lives every day.

Some lost support while others still gain attention for themselves. You know, the ones having events to have fun.

If that does not nauseate you enough, go to one of the events and see what a good time they are having...because veterans are killing themselves.


Suicide Awareness is not suicide prevention!

What is wrong with the supports who find no fault in having a good time because veterans are killing themselves?

This is the chart from the latest VA Suicide Report 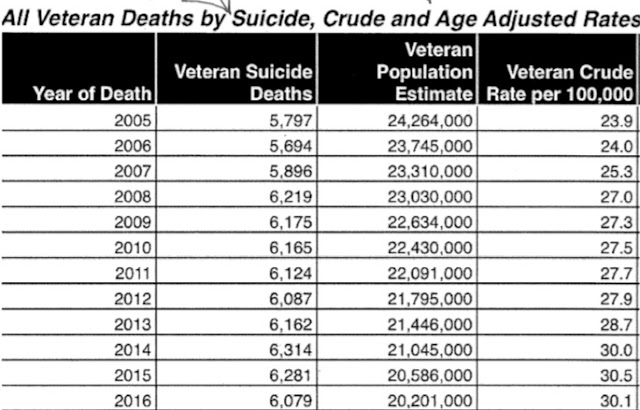 Some fight the works of iniquity.


Former NIMH head Thomas Insel recently made a remarkable concession. He acknowledged that the biomedical framework he adopted while directing $20 billion dollars in NIMH research funds failed to "move the needle" in improving the lives of the millions of people with mental illnesses. Here is his full quote: “I spent 13 years at NIMH really pushing on the neuroscience and genetics of mental disorders, and when I look back on that I realize that while I think I succeeded at getting lots of really cool papers published by cool scientists at fairly large costs—I think $20 billion—I don’t think we moved the needle in reducing suicide, reducing hospitalizations, improving recovery for the tens of millions of people who have mental illness.”


It is time to kill the business they are in because it is one with a deadly outcome!

UPDATE
This is from one of those events that happened yesterday.


Nov. 17th, 2018
Challenge 22 - 2.2 Mile "Ruck" Walk and Block Party
Come out to join the Winter Garden American Legion Post 63, in partnership with the Crooked Can Brewery,  and our community for a walk , block party and a day of camaraderie to raise awareness for PTSD and Suicide in Veterans.

Join us for a patriotic opening ceremony, the walk, raffles, food, drink, kids activities, live music and so much more!  You are encouraged to bring your Ruck (hiking pack) if you have one, but it is not required.  Walk the full 2.2 miles or stop after the first leg as we will pass back by the Post after the first 1/2 mile.  We are hoping to have some of our WWII, Korea and Vietnam vets participating along with the younger generations.

Bring your family and friends to join the hike or just come out to enjoy the festivities, there will be something for everyone! Again, the goal is to have a great time, while raising awareness to a tragic epidemic of 22 suicides per day due to PTSD and lost HOPE.

Registration and sign in will begin at 10:30am. The opening ceremony, which will begin at 11:00am, will be followed by the 2.2 mile walk.  Immediately after the walk, we will have an afternoon of fun, with live music, food, Crooked Can beer, kids activities and so much more.  The live entertainment will end at 5pm, but the Plant Street Market businesses will remain open into the evening.

No requirement to carry anything, but you are welcome to bring your own pack (filled or empty...no one will know)