A new you can begin today

Last year did not start out so great. Pasco County Deputies were dealing with the death of an Air Force veteran, John Sellinger. His family was trying to comprehend what happened. Others who served with him, and knew him were shocked.A foundation was dealing with the loss as well.


Sellinger's wife, Laura, had reported him missing that day. He lived in a Seminole Heights house recently donated to his wife by the Gramatica Family Foundation. Both Sellingers had served in the Air Force. An improvised explosive device had detonated near Laura Sellinger in Iraq in 2006, causing a severe brain injury.

Over in Texas, it was a positive ending because  Judge John Roach Jr. decided that he should treat veterans like more than just a number.

"When I was accepted into the veterans' court, it was the first time I was treated like I wasn't just a number in the system." Richard Ress

It seems like every year I wonder what it will be like at the end of the year for veterans, much like I did last year.


"I have witnessed veterans doing as Artaban did, giving all they had intended for God to be used in God's name because someone needed them. They are by "brothers" in Point Man International Ministries running around the country offering hope, showing veterans how to heal and then standing by their side when everyone else has walked away from them."

Today I think it is time for something new. Something that will prove what is possible when people decide to take control over their own lives, especially when those lives were willing to die for the sake of others. Imagine that? So, here are some of the best stories from last couple of years! 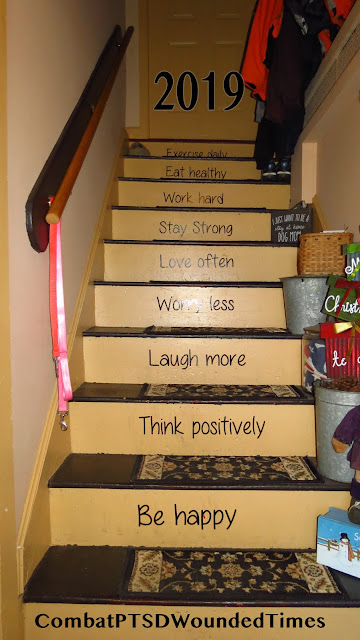 Rafael Semmier used his training as a combat medic to save a life at Walmart after someone decided to shoot others.

Disabled Vietnam veteran Mike Elliot discovered how much he mattered to his neighbors after his house caught on fire in Pennsylvania.

In Kentucky, Veterans chose to dance to heal PTSD and spend time with others rejoicing instead of regretting.

Another disabled Vietnam veteran, survived Hamburger Hill, losing his home, but found help and then, helped others.

Fort Carson soldiers risked their lives to save a woman trapped by her SUV after a rollover accident.

A homeless veteran living on the streets of Sacramento used his military training to save his own foot instead of letting it be amputated.

Marine Master Sgt. Clifford Farmer decided that he wanted to live and battle the enemy inside of himself as much as he fought the enemy in Iraq. PTSD was not something he was willing to surrender his life for.

Veteran William Goliher depended on those he served with in Afghanistan and Iraq, and then his community to help survive his battle with PTSD.

A disabled veteran in New Hampshire asked for help to fix his home, and the community responded big time!

Another veteran trying to heal PTSD discovered the power to fight for her own life from a cat who was an amputee!

A disabled veteran with a PTSD Service Dog won for the sake of all people with service dogs when he fought American Airlines.

IraqVeteran Jame Trumble decided to fight to take back his life and with the help of the VA. He did exactly that.


Bill Wedekind lost both his hands and eyes at age 18 from an IED in Vietnam, but his drive to live and inspire others helped heal other wounds.

Minnesota National Guard and a St. Paul police officer Eric Reetz found a homeless veteran and gave him a challenge coin so that he could stay in touch with the veteran.

Double amputee, Brian Mast is an example of determination and inspires as a Congressman from Florida.

A veteran of Afghanistan, Maj. Lisa McCranie is a pilot to the core, so steeped in the culture of never showing weakness that she hid every symptom of post traumatic stress disorder even as the weight of war began to crush her spirit. Years in uniform and the bulk of 2,800 hours in the cockpit went by — 1,100 of them in combat — before she even realized she had PTSD. McCranie found herself in yet another war, to get help.

Veteran Joe Clemens decided that he didn't need such a big house, so he started offering veterans in need of help a place to stay...and heal.

And Vietnam veteran Dave Roever was inspiring soldiers at Camp Casey with the story of how he recovered from being burned.

And those stories just happened in January of 2017.

And then there are police officers; Chris Sutherland and Jeremy Wood, school resource officers of Marysville Pilchuch High School.

Orlando Police Officers fought to have PTSD covered for first responders, unafraid to come out, talk about what what came after Pulse, and the won.

Firefighters did it too. Kern County Fire Department Captain Derek Robinson talked about his battle with PTSD, so others would break their own suffering in silence.

Phil Hall talked about his battle with demons.

UPDATE: I used 2017 because last year was not such a great year on good reports.

The Crew of the North Dakota did whatever it took to save a sailor after he tried to kill himself. Imagine that? He shot himself instead of turning to those he served with, but they proved how much they cared about him.

A Marine veteran, Wendell Blassingame, known as the Saint of Skid Row, made sure that other veterans were not left alone, and proved they mattered.

I think my favorite stories from January was of veterans reaching out to the Sheriff's Office to help them with PTSD. Budd Huffman and Jim Muhr decided that reading stories was not going to cut it, so they decided to do something about it. Share what they were going through and #BreakThe Silence.

There are so many more of them because more and more are discovering the power they have to help others, just as they did in the services they dedicated their lives to.

That is the thing that gets missed way too often. Your jobs are all about doing for others, so how about you take that seriously now? Heal for others and then show them the way toward something to hope for~

Note to readers...updated to add in more since, as I said, I was struggling with trying to just do a positive post today.
Posted by Kathie Costos at 4:07 PM